The Moons of Barsk 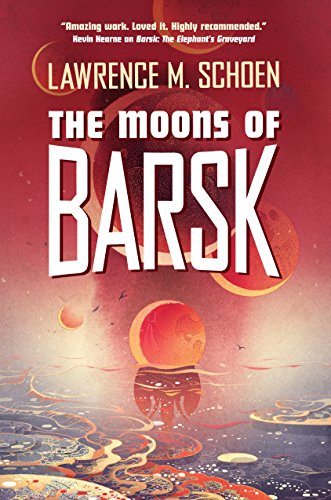 “The Moons of Barsk accomplishes what science fiction does at its best. It uses invented technology to push ideas beyond the limitations of the everyday.”

A book peopled with talking animals can be hard to take seriously, inviting comparison with children’s stories and morality tales. When the animal characters are anthropomorphic elephants that travel in spaceships, readers might reasonably anticipate a comedy. Schoen defies such expectations, however, employing elephants, sloths, raccoons, and yaks in a sensitive exploration of the very human tendency to hate and fear those who look and behave differently.

The Barsk novels contain dozens of sentient mammal races, homo sapiens having long since gone extinct. The elephants are hated by all of the furred races, who find their smooth skin and prehensile trunks disgusting. Centuries ago, the elephants were exiled from all the planets of civilization and forcibly relocated to an undesirable planet called Barsk. The elephants are not without their own prejudices, however: They pretend that their own children born with genetic deformities don't exist and leave them in the forest to die.

The Moons of Barsk is the second novel in this series. It continues the story of Pizlo, a deformed child who survives. The elephants of Barsk all pretend he doesn't exist, even as he walks among them, and consider him an abomination, if they speak of him at all. Through the experiences of Pizlo—and of the elephants in the larger culture of the galaxy—the book asks intriguing questions about diversity and human nature. Does diversity help a society thrive? Can people overcome the desire to hate and destroy the other? If people could be forced to understand the perspective of others, would it be moral to do so?

At a key point in the story, Pizlo has the opportunity to force the other elephants to see him from his perspective and accept him as a person, but he chooses not to, saying it would set him free, but "at the expense of everyone else's choice." He argues that although a broader understanding of diverse people benefits society, it can't be forced on them; they have to choose it for themselves. This stands in contrast to the larger elephant society's willingness to take violate the agency and minds and memories of others in an attempt to protect them.

The Moons of Barsk uses an intriguing technology to explore these moral questions, one based on "nefshons," the particles of consciousness. Through the ability to detect and manipulate these particles, the elephants can access the very stuff of personhood, and thus speak to the dead, communicate across vast distances instantaneously, and erase or implant memories and thoughts.

A secret group of elephants called the Caudex has developed this technology and used it to spread elephant populations across the galaxy, guarding against the very real possibility of genocide. To accomplish this, however, they are willing to manipulate others by implanting false memories, erasing minds, even killing those who stand in the way.

This technology was introduced in the first book of the series (Barsk: The Elephant's Graveyard), but this book takes it farther. Jorl, the main character from the first book, wants to improve race relations by inviting other races to settle on Barsk. The Caudex sees this as a threat and tries to use nefshon technology to kill him. What follows is a fight between two powerful forces with the same goal (the safety of the elephant race), but separated by prejudice.

The Moons of Barsk accomplishes what science fiction does at its best. It uses invented technology to push ideas beyond the limitations of the everyday. It explores human nature by subjecting people to unusual extremes and impossible situations. And if the people in question weigh ten thousand pounds and have gray skin and a trunk, that doesn’t make them any less a picture of who we really are.