Moonbound: Apollo 11 and the Dream of Spaceflight 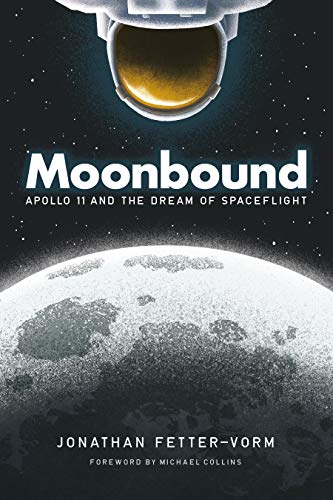 “In this wide-ranging story of exploration, Fetter-Vorm captures both the mystical pull of the moon and the many men and women who worked hard to understand and reach it. . . . a brilliantly compelling blend of words and pictures, taking the reader into their own voyage of exploration.”

The 50th anniversary of the Apollo 11 moon landing has launched numerous books. Moonbound, the graphic novel by Jonathan Fetter-Vorm, stands out on this crowded shelf. The book provides a history of scientific attitudes toward the moon and rockets in a series of monochromatic pages interspersed with full-color pages of the Apollo 11 mission. As the past becomes the present, the monotone pages stop, and the reader is hurtled into space along with the Apollo 11 astronauts.

Providing the historical and scientific context gives this book a heft and depth. Starting with Kepler and moving through Brahe, Galileo, Newton into rocket science with Von Braun and Goddard, Fetter-Vorm presents physics, astronomy, and engineering in a clear, accessible way.

The use of art, the unique capabilities of the graphic format, are deployed to their best advantages here. Even the most scientifically averse will find these pages compelling, the drama of the storytelling carrying the reader through the scientific and philosophical details. The drawings of Galileo's moons are especially lovely.

Fetter-Vorm doesn't shy from the darker parts of the history, including the white-washing of Nazi scientists, but the narrative never drags or moralizes, moving briskly along with the scientific progress that's detailed. “When President Truman authorized Operation Paperclip, he explicitly refused to grant American citizenship to former Nazi officers. What Truman didn't know was that OSS operatives were secretly forging papers for the scientists, covering up any inconvenient truths. So began the wholesale exodus of Nazi scientists to the United States.”

He also includes the brief flirtation with the idea of women astronauts. “One of the few outspoken advocates for sending women into space was Dr. Randy Lovelace. . . . On average, women were smaller than men and consumed fewer calories and less oxygen, which was ideal when the goal was to build as light a spacecraft as possible.” Women were even tested, and some strong candidates emerged, but the idea was too radical. As John Glenn is quoted here, “The men go off and fight the wars and fly the airplanes and come back and help design and build and test them. The fact that women are not in this field is a fact of our social order.”

This was another area where the Soviets beat the American, sending a woman into orbit in 1963. In fact, throughout the Space Race, the Soviets beat the United States, first with Sputnik, later with Yuri Gagarin, the first person in orbit. Only with the moon landing did America finally come out ahead.

The Apollo pages are especially propulsive, detailing all the work that went on behind the scenes (including acknowledging all the women who worked as “computers,” calculating trajectories by hand). Once the lunar modular (lem) lands on the moon, the big question is where exactly they are.

Mike Collins, the astronaut in the command module, scanned the moon's surface, looking for the lander. “Every two hours Collins passed briefly over the Sea of Tranquility. Using the optics on the ship's sextant, Collins scanned for some sign of his crewmates . . . which meant that with each pass, he had just two minutes to search for the Eagle.”

While being dramatic, Fetter-Vorm is still careful not to romanticize the space program. He includes pages questioning the value of the experience. “If Apollo 11 had so deeply altered the course of human history, then why, back on earth, did things seem to be getting worse? Soldiers committing atrocities in Vietnam. Cities collapsing under the weight of racism and poverty. Toxic rivers catching fire. None of the problems that seemed to be tearing America apart in 1969 were soothed by the sudden appearance of footprints on the moon.”

The book ends by looking at the future of space travel being directed by private billionaires, men like Elon Musk and Jeff Bezos. “After all, how many of history's great expeditions were not somehow spurred by the promise of profit.” In this wide-ranging story of exploration, Fetter-Vorm captures both the mystical pull of the moon and the many men and women who worked hard to understand and reach it. This is a complex story, many strands woven together into  a brilliantly compelling blend of words and pictures, taking the reader into their own voyage of exploration.