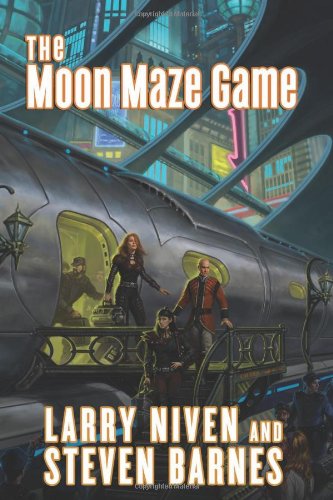 “It is a book that demands to be devoured in big, meaty chunks . . . [there is] an un-put-down-able quality between the covers of The Moon Maze Game.”

“A moment of stunned silence, as Wayne’s mind whirled. They were on the Moon, pretending to be on the Earth, about to travel to the Moon. But not the real moon, but the fantasy moon envisioned by H. G. Wells.”

If this extract from Mr. Niven and Mr. Barnes’s latest science fiction book is about as clear as mud, you are not alone. But if it appeals to you, then you are in for a real treat.

The standalone latest volume in a series of science fiction “game-playing” novels, The Moon Maze Game is focused on ticking the boxes for gamers everywhere: two-dimensional characters with cliché dialogue but plenty of excitement and macho heroism. And it succeeds.

Centered around “a type of gaming in which players believably role play” The Moon Maze Game is set in 2085, with “humanity spread throughout the solar system and a stable lunar colony agitating for independence.” In the first few chapters, the reader is transported between various lunar and earthly locations on a whistle-stop introduction to the significant—and some insignificant—characters.

The problem is that without the subtle yet indelible details that imprint characters on the reader’s mind, they go as quickly as they come. It is a book that demands to be devoured in big, meaty chunks because unless sizeable amounts of this book are read in one sitting, the reader has to retrace his steps through earlier pages to refresh his memory.

Nonetheless, this series of books has been hailed as “extremely influential science fiction” according to publisher Tor Books, so it is safe to assume that the hordes of gamers hooked on role-play gaming in general, and this series in particular, will find an un-put-down-able quality between the covers of The Moon Maze Game.