The Moon Looked Down 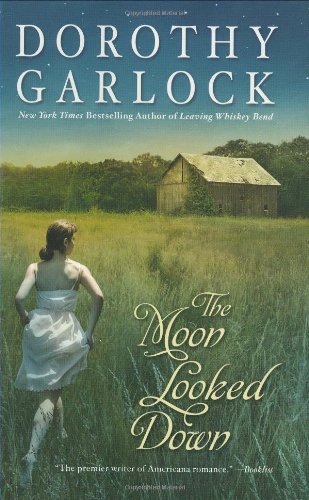 Nothing stirs a female heart more than a handsome man with a physical challenge. The inherent mothering instinct is intertwined with a mixture of physical desire and deep-seated admiration. In Dorothy Garlock’s The Moon Looked Down, Sophie Heller is entranced by the club-footed Cole Ambrose. Her focus is more on the muscles under his shirt than the hitch in his gait. Cole has zero experience with women, but his confidence is buoyed by the determination to protect Sophie from the dangerous intentions of a local group of thugs.

The time is summer 1942. The place is aptly named Victory, Illinois. The rural community is composed of homes adorned with flags and businesses displaying anti-German propaganda. Ellis Watts and his cronies view German immigrants, like Sophie’s family, as Nazi spies. In a planned attack, they set fire to the Heller barn leaving Sophie and her father brutally beaten. With fear of reprisal, they do not report the true nature of events to the police.

Tensions are high when Sophie enters Marge’s Diner only to be taunted with the slur, “Kraut.” Feeling invincible, her tormentors issue their accusation in a public place. Sophie confronts them only to be viciously grabbed. Like a scene out of Back to the Future, Cole comes to her defense. Mocked by the men, his bravery nevertheless makes an impression on Sophie. With her trust in tatters, she is still able to appreciate the fact that Cole is an honorable man.

“I’m not going to hurt you, Sophie,” he said, his voice determined and firm. “After everything that happened at the diner, I think you have plenty of reasons to trust me.”

The sincerity in his voice gave Sophie pause. Though she had met Cole Ambrose only an hour earlier, she could feel that there was a depth to him, a strength in the way he carried himself that put her at ease. She found herself believing what Cole told her.

“I don’t think you’ll hurt me,” she heard herself answer.

The spark is lit. The memory of him was a powerful thing, coming unbidden yet not unwanted. With the idea of a gimpy man as her protector, Sophie’s heart melts. Like Jenny in Forrest Gump, Sophie knows she can depend on Cole regardless of his infirmity. She tells Cole what really happened the night of the fire, and he vows to keep her safe.

Sophie found that she wasn’t quite so scared. Looking at Cole’s square jaw and broad shoulders, she knew that he was a man willing to rise to her defense, just as he had at the diner. If she were to meet any of the men who meant to harm her, she felt sure she would be safe as long as she was in Cole Ambrose’s company.

Taking matters into his own hands, Cole confronts an inebriated Ellis in Victory’s lone tavern.

“So you decided to play the hero, huh?” Ellis smirked.

“You’re only going to get yourself hurt.”

“We’ll see about that. It’d be a mistake to underestimate me.”

“Like the fact that you’re sweet on poor Sophie. You ain’t ever been with a woman have you? I’ve known a couple of fellas like you. All of ’em shy and more than a little unsure of themselves. With your leg, wouldn’t be nobody that’d blame you for it. Ain’t never had no attention from a lady. Then some pretty girl starts talkin’ in your ear and you start thinkin’ with what hangs between your legs instead of using your head.”

“It’s not like that. Stay away from her, Ellis,” Cole warned him. “Or you’ll be sorry.”

However, Cole’s insecurities lie less with his malformed leg than with his fractured relationship with his father. Like the broken father/son dynamic in Garden State, the father blames the son for the accidental death of the mother.

“If you wanted to come back here, back to this house and to Victory, that’s your business, [Cole’s father] said evenly. “You can stay here until you find somewhere of your own . . . I can do that much for you. But don’t think that I will ever forgive you.”

“She would not have wanted it to be like this between us.”

“All that she would have wanted was to have lived, but you took that away from her that day, took it away from all of us,” his father said, the words spoken flat and cold, each of them jabbing at Cole’s heart as if they were knives. “It was because of you that she’s gone. It was your fault. Don’t ever forget that it was your fault.”

To make matters worse, further violence descends upon Cole in the form of Graham Grier, a childhood friend of Sophie, who instigates a bloody fist fight with his new rival. Afterward during a dance to celebrate the community re-building of the Heller barn, Graham makes a drunken scene.

“You’re not good enough for Sophie, and you never will be! You worthless cripple! She should be with me!”

From that moment on, things come to a head. Over the course of the evening, the score is finally settled in Victory, Illinois.

Overall, the moon is a witness to scenes of love and acts of violence on the WWII home front.