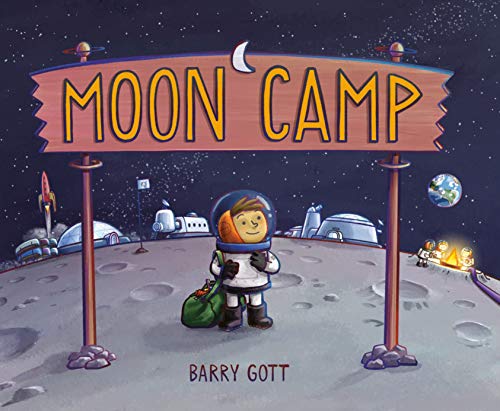 “Moon Camp is brilliantly implemented by Barry Gott as author and illustrator.”

Summer vacation is the best! And Lucas has his all planned out. School’s out. He’s ready for loads of sleeping-in and kicking back with video games.

That is, until Mom and Dad sign Lucas up for Moon Camp.

Okay, so most kids would jump at the chance to travel by rocket to attend summer camp on the moon. But Lucas has some pretty good reasons why he’d rather not. One being, there isn’t any oxygen. Oh, and he’s allergic to moon dust.

Lucas is a total charmer as the kid who would rather stay home and tend to his summer agenda. But he can’t—he’s on the moon. There are just a few things he’s going to have to get used to first, like space food and zero gravity and the bathroom situation.

Things are not looking up for Lucas. All the really cool camp activities like “Space Racing” and “Laser Archery” are all full. Um, except for “Looking at the Rocks.” That activity is wide open.

Moon Camp presents the usual first-time-at-camp routine, but with an irresistible galactic spin on it. Yes, he misses Mom and Dad and just about everything else. But all is not lost, especially when another rocket lands, filled with new moon campers. And Sam!

Moon Camp is brilliantly implemented by Barry Gott as author and illustrator. The color saturation in the illustrations fuel the story with lively fun. Plus, the story itself is a total delight. Mr. Gott’s career spans years of creating greeting cards and many other books for kids. Moon Camp is his second author/illustrator book. Check out his first, HONK! SPLAT! VROOM!, plus many more (as illustrator) on his website.

Summer camp is where memories of a lifetime are made, no matter where that camp ends up being. That said, kids are going to love Moon Camp.  And will beg their parents to sign them up too! If only.

Carmela LaVigna Coyle is best known for her Do Princesses Wear Hiking Boots?, an 11-book series illustrated by Mike Gordon. Her recent book Can Princesses Become Astronauts? is now available in Spanish. Her previous book, Wild Zoo Train, is a Foreword Indies Silver Book Award winner for Picture Books/Easy Reader and is a Colorado Book Award finalist. Ms. Coyle's upcoming picture book, Something Spectacular, is scheduled for 2022 release from Muddy Boots Books. The story follows a mysterious rock over millions of years as it slowly becomes everyone's favorite treasure.