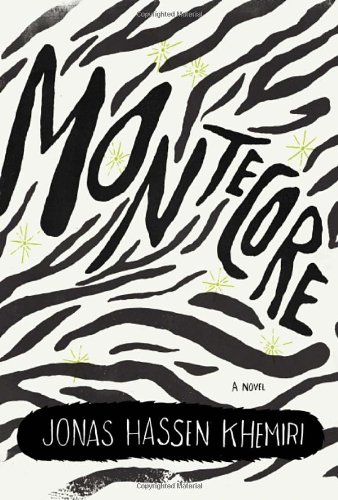 Winner of the Per Olov Enquist Prize, Sweden’s highest literary honor, Jonas Hassen Khemiri’s Montecore is the story of Abbas, a Tunisian immigrant who falls in love with a politically-minded Swedish woman and follows her back to Stockholm, where he tries to reinvent himself as a Swede and apolitical artist.

Recounted in an idiosyncratic and often humorous manner by Abbas’ lifelong friend, Kadir, and by Abbas’ estranged son, Jonas, who bears the same name as the novel’s author, Montecore brings a metafictional slyness to the kind of immigrant narrative that many Americans will immediately recognize, with its elements of aspiration, disillusion, and filial rebellion. Originally published in 2006, this is Mr. Khemiri’s second novel—his first to appear in English.

Surely the translation of Mr. Khemiri’s work is overdue. His first novel, Ett öga rött (One Eye Red) published in 2003 when he was only 25 years old, was a critical and commercial sensation in Sweden, with its tongue-in-cheek parody of “Rinkeby Swedish,” the urban youth argot of Sweden’s growing immigrant minorities. Mr. Khemiri also writes plays, which have been staged in Stockholm as well as translated and produced in Berlin and Paris. Of mixed Swedish-Tunisian parentage, Mr. Khemiri grew up in Stockholm, attended university in Paris, and worked in New York as an intern at the United Nations.

In his case, there’s no need for breathless hype about the “globalization” of literary fiction, because there’s always been a vital tradition of the cosmopolitan writer. This is what Mr. Khemiri embraces in Montecore.

The tale begins when Jonas, who hasn’t seen his father Abbas for many years and doesn’t even know his whereabouts, receives an unexpected email from Kadir, his father’s old friend and sidekick. Kadir enthusiastically suggests that the now-famous author write the story of his father’s life. Jonas initially rebuffs Kadir, but as their correspondence swells, the reader learns how Abbas, a fabulist who hid his Algerian Harki background, grew up in a Tunisian orphanage before embarking on a new life with a Swedish wife. He dreams of a career in photography like his hero Robert Capa.

Kadir makes extravagant claims for Abbas’ latest achievements as a high-flying humanitarian artist-hero. (The name “Montecore” refers to the tiger that performed for the illusionists Siegfried and Roy, whose improbable transformations are rivalled by Abbas.) As the story unfolds, Kadir’s own identity becomes a matter of wonder. (Kadir observes, “our book’s honesty should be maximally spiced.”) Jonas’ recollections reveal not only his father’s progression from a cheerful dreamer into a self-hating and frustrated immigrant, but also the son’s struggle to find a place in Swedish society. Perhaps inevitably, Montecore is the story of the writer’s quest for an identity.

Jonas and his circle of friends, all of them “blattar” (a highly charged term for mixed-race immigrants), resist the dominant culture of so-called “Swediots” while subsuming their own particularities (Tunisian, Nigerian, Chilean, or Somali) into a commodified rebellion sold by American culture. They listen to Straight Outta Compton and earnestly substitute every “nigga” for “blatte.” They express their difference by wearing Champion shirts, NBA shorts, and LA Raiders caps. This, of course, is not a Swedish particularity—you can see the same choices being made by unassimilated youth all over Europe. Hip-hop is a demotic mode for much of the world.

The local context, however, remains crucial, notably the references in the novel to the real-life John Ausonius, aka “the Laser Man,” who in the early 1990s went on a rampage of randomly shooting immigrants. He earned his nickname because of the circle of red laser light that his surviving victims noticed on their bodies shortly before they were shot. He struck eleven times before he was apprehended. In Montecore, Khemiri includes the real names of the victims, while describing the psychological havoc wreaked on immigrants and their children who feared that they might be next.

Mr. Khemiri takes the greatest risks in regard to style. And here, his translator, Rachel Willson-Broyles, has been given a fiendishly difficult task. Kadir’s emails are supposedly written in an idiosyncratic Swedish he learned as an adult, heavily influenced by Arabic and French. He enjoys puns and often sounds like a cross between a hypeman and Mrs. Malaprop, with an occasional dash of Borat thrown in. Although this reviewer doesn’t read Swedish, and thus cannot make an informed comparison to the original text, the English version of Montecore does succeed in capturing a playful polyglot flavor, a sense that language is supple and fun, and for this Willson-Broyles should be congratulated. Kadir’s malapropisms sometimes enrich the meaning, for instance: “I tried to comfort his tears but only certain sorrows are comfortable.” His off-kilter descriptions can give everyday observations a surreal quality, as in this allusion to a character who has aged: “the tooth of time had munched a festive breakfast on his exterior.”

Aside from language, plenty of other stylistic choices vie for the reader’s attention. Jonas’ emails are written in the second person; occasionally the narration relies on old letters, or crossed-out typography that the reader can still decipher. There is nothing “wrong” with such devices, of course, but, as they pile up, it’s sometimes unclear what purpose they serve, beyond mannerism, or making the writer appear very busy. The inclusion of young Jonas’ fantasies when playing with toy cars, or references to role-playing games, or the list of “mnemonic rules” with their overly didactic claims about how language reflects culture, drain energy from the story and the style. If this novel had 40 fewer pages of cleverness, it would be more clever.

That said, Montecore is ambitious in the best sense, confronting readers, in an entertaining fashion, with vexed questions. It is occasionally ponderous but never pompous. Mr. Khemiri’s achievement is perhaps best summed up by an observation that young Jonas makes about his father, affectionately referred to as Dads. He says, “normal parents either speak Swedish or Not Swedish, but only dads have their own language, only dads speak Khemirish.” This novel bears a similar stamp of originality, and shows that “Khemirish” is an interesting language indeed.