Monster, She Wrote: The Women Who Pioneered Horror and Speculative Fiction 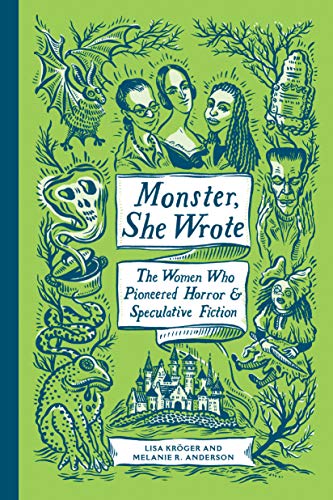 “Monster, She Wrote is a lovely volume for new readers, and an excellent gift for oddball teens, but it should be backed up with more resources for those seeking knowledge of the genre beyond a friendly (fiendish) reading list.”

Monster, She Wrote is authored by the co-hosts of The Know Fear Podcast, which explores horror from the perspective of culture and source material (serial killers, zombies, haunted houses, historical madwomen). The podcasting approach is apparent in this first book by Lisa Kröger and Melanie R. Anderson. At once brief and encyclopedic, Monster, She Wrote provides an introduction to a wide range of material for readers new to SF and horror.

There’s an obvious provenance for this book in backlash against the Sad Puppies, a reactionary movement launched in 2013 which ensured that the middle years of this decade would be embroiled in a debate about who “owns” speculative fiction. (The Sad Puppies official demand for “readable” SF was a thinly veiled demand that representation and authorship beyond cis white male should remain marginalized and reviled.) Lightspeed magazine responded in 2014 with a crowd-funded issue “Women Destroy Science Fiction,” which featured all women authors.

That description of Mary Wollstonecraft Shelley’s writing Frankenstein might easily function as a blurb for Kröger and Anderson’s book. Their volume is a collection of brief introductions to women SF/horror writers, each entry less than ten pages in length, and many only two or three. Those overviews are accompanied by funky illustrations and magazine-style oversized excepts (usually just a sentence or two) of the featured author’s work.

The account of Mary Shelley’s work in Switzerland during the epic Year Without a Summer is gossipy and simple, intended to intrigue rather than to offer new insight: “By the time of the gathering, Byron had slept with Mary Shelley’s stepsister Claire. He was, to put it mildly, over their dalliance. She, however, was not. It was Claire who suggested that they all go visit him in Switzerland.”

While Kröger and Anderson are accurate in their representation of the story, they’re also clear that their audience is young and new to the field. The subtitle may officially be “The Women Who Pioneered,” but the book has “Girl Power” all but emblazoned on its pages.

On the one hand, the book is a valuable resource for its intended audience. It introduces early modern authors such as Margaret Cavendish and Ann Radcliffe, walks carefully through the 19th century with Elizabeth Gaskell, Charlotte Riddell, and Edith Wharton, and breaks the 20th century into useful categories: “The Cult of the Occult,” “The Women Who Wrote the Pulps,” “Haunting the Home,” “Paperback Horror,” and “The New Gothic.” In bringing together distinguished authors like Toni Morrison and Sarah Waters with less-respected ones like V. C. Andrews and Anne Rice, Kröger and Anderson point to the ways in which “women’s fiction” has been historically marginalized and discounted.

On the other hand, with two such knowledgeable authors contributing, many readers will wish for more depth. Toni Morrison’s entry frames Beloved as “a full-on ghost story from top to bottom. Morrison centers the story of the title character, the ghost of a deceased girl called Beloved, in order to explore the haunting, horrifying effects of trauma.” All true, but the breezy overview fails to do crucial authors justice.

If Monster, She Wrote has a flaw, it’s in form. The book is broad in scope and shallow in depth, yet engaging enough to leave the reader wanting a deeper dive. Monster, She Wrote is a lovely volume for new readers, and an excellent gift for oddball teens, but it should be backed up with more resources for those seeking knowledge of the genre beyond a friendly (fiendish) reading list.