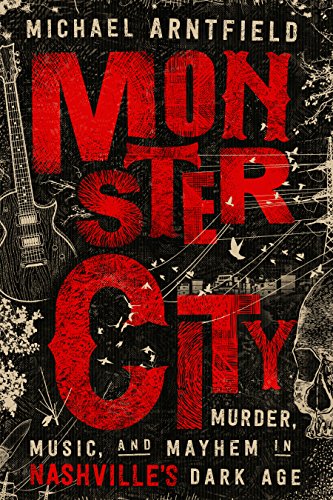 “Monster City will make an excellent addition to any true crime enthusiast's library.”

“When I hear music, I fear no danger. I am invulnerable. I see no foe.” —Henry Davis Thoreau, “Winter”

Nashville is a hub for hopeful musicians and a magnet for country music fans. It’s often referred to as Music City, and by the time Pat Postiglione arrived there in 1980, it had already borne witness to a string of brutal unsolved sex slayings. These murders would serve as a portent to worse things to come. As Postiglione was promoted from Metro beat cop to detective sergeant in the elite cold-case unit “Murder Squad,” some of America’s most heinous, elusive, and violent serial killers were calling Nashville home. Over the next two decades, the body count continued to climb.

From Vanderbilt University to dive bars and out-of-the-way motels, Postiglione followed the blood-stained tracks of these ever-escalating crimes—each perpetrated by a different killer who had one thing in common: the intent to murder without motive or remorse. But of all the investigations, of all the fiends Postiglione hunted, few were as frightening, or as game changing, as the Rest Stop Killer: a homicidal trucker who turned the interstates into his trolling ground. His next stop was Nashville, but Postiglione was waiting.

“. . . he hadn’t returned to Music City for the pedal steels, fiddles, or line dancing . . . He was awake now. His eyes wide open. When it was all over, they would use newfangled terms like activated psychopath and malignant narcissist to try to capture the essence of his malevolence—to clinically classify and quantify his pure evil . . . He’d inevitably fooled just about everyone . . . But there was one person he couldn’t fool. It was the one cop who’s caught him—the same cop who’d solved his first murder and who’d lock him up . . .”

Michael Arntfield is a true crime broadcaster, university professor, former police detective, and author of over a dozen books and articles that include the bestselling Murder City: The Untold Story of Canada's Serial Killer Capital, 1959–1984 (2015, Friesen Press). In his captivating new book, Monster City: Murder, Music and Mayhem in Nashville’s Dark Age, Arntfield examines the true accounts of the serial killers who terrorized Nashville during the last decades of the 20th century and the elite police squad that was determined to bring them to justice. In it he contends that the characteristics of the serial killings committed during this time frame were perpetrated by “the hedonistic-thrill killer . . . a special breed of psychopath with an insatiable desire for stimulation.”

Throughout Monster City Arntfield does an excellent job of detailing the investigations, forensics, and theories behind the motivations of these brutal murders. It is a powerful expose that studies the deep dark nature of the criminal mind.

Although at times Arntfield’s writing style tends to be a little bit sensational and there’s some repetition, overall this book is informative and shines a spotlight on some of Nashville’s most brutal and long forgotten crimes. It also does an excellent job of describing the heroic police detectives who put themselves in harm’s way. These brave men and women through countless hours of self-sacrifice to pursue these heinous criminals to make our streets safe for everyone. Their steadfast resolve and persistence must be honored and applauded. Monster City will make an excellent addition to any true crime enthusiast's library.