Monkey: A Trickster Tale from India 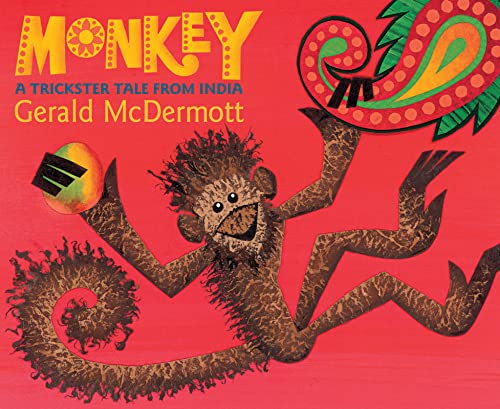 The illustrations in Monkey: A Trickster Tale from India are rich with vibrant colors, while the tale is equally peppered with cleverness and humor, and, of course, just the right amount of mischief to relay a moral to the reader.

Monkey begins this tale by jumping high up into the treetops. He is fast and no other animal can catch him. Unknowingly, there is a stealthy danger: a crocodile spies him swinging through the trees and wants nothing more than a tasty snack.

Soon they meet. Crocodile offers to take monkey on his back to an island where ripe, lush mangoes grow. Monkey accepts the offer from the kind crocodile, his mind thinking about all the mangoes he was going to eat. Monkey doesn’t think that crocodile had something evil in mind. He knows that monkey cannot swim.

It’s almost too late when monkey realizes he has been deceived, so he tells crocodile an outrageous lie. Crocodile believes him, taking monkey to the shore where he escapes—this time. Monkey swings his way out of trouble and to the island where the mango tree will feed him every day. But crocodile doesn’t stop giving up trying to eat him and tries to deceive him again. Will monkey be able to escape this fierce predator? Or will he fall prey and get eaten by the crocodile who believes he’s the wisest?

This tale of the clever monkey and the crocodile is part of an ancient collection of tales of folklore, fables, and legends called the Jakata tales (India) or trickster tales (Africa). This is the final volume in the author’s series of six trickster tales.