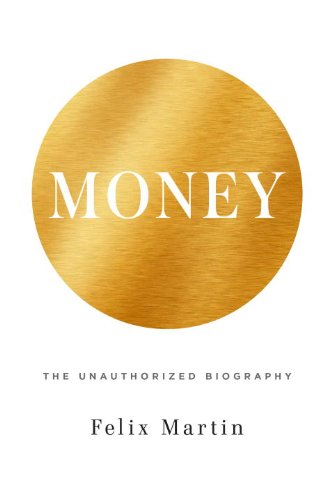 “When an economist argues that money is inherently a social phenomenon, that is reason enough to read the book. That Martin does so cogently, with rich historical detail, and in plain language makes for a compelling case.”

Money is something we use and think about all of the time, but we rarely examine its meaning.  The way most economists begin to think about money is to imagine a world without it. Our means of exchange would be barter, and that would be inconvenient and inefficient. It would be difficult to measure how we place value on what we have and what we want. It would be more difficult to store what we value for future use and to account for what we owe and are owed.

Economists often go beyond this simple thought experiment, and argue that primitive societies once functioned purely by means of barter. In fact this is unlikely to have ever been the case.  People use commodities to trade with each other, and money is simply one of those commodities. It began as measures of grain or cattle or metals. And eventually, as the measures were standardized, a measure of metal became standardized as a coin.

There have been two important developments since coinage in the ancient Greek world. First, governments often took the responsibility for issuing coins, which gave users more confidence in both the standardized weight and purity and at the same time in their ability to pass off the coin on someone else. This made money a commodity that is in many ways sui generis.

Second, money has become increasingly conceptual and based upon confidence and making claims by using one’s identity.

The commodity we choose to serve as money serves as a denominator of exchange, a means of exchange, and a store of value. Since the time that Lydian staters served as tokens of money in the 6th century BCE, money has become increasingly conceptualized—which is to say it is more and more detached from useful and valued commodities such as metals or grain.

Claims on value (sometimes credit) were often written in some form, and indeed they were put on tablets in Mesopotamia thousands of years before there were coins. As technology changed the claims were written and then printed on paper, and that paper has been used for exchange and for savings since ancient times. For a relatively brief period (in terms of written history) we’ve used paper as our primary form of money, and as with coinage governments have been the primary issuers.

Governments have assumed the responsibility for maintaining confidence in money, and of course they have often been the cause behind crises in confidence. Issuing money is good, but issuing a lot more of it is not a lot better—particularly when the money is on paper and by fiat.

Today money is often virtual: an electronic account that is maintained by a depository institution, or a payments company. This is not a complete change from using metal coins.  Coins are often just as symbolic as electronic blips. You probably don’t melt down coins for their value, because they are symbolic tokens.

You might not have known, even, that the copper in pennies minted until 1982 are worth double their face value; or that a few years ago the zinc in modern pennies sold for more than one cent. They are symbols, not weights of precious metal.

To make this symbolism more convoluted we claim possession of money by means of identification: a signature, or a password, or a token (such as a card) in our possession. Money, it seems clear, is a type of a social technology; and our confidence in it is dependent upon the government. Money is a language and a system of human interaction and social organization.

This is the central thesis of Felix Martin in his interesting study Money: The Unauthorized Biography.  Martin traces the history of money from ancient times and uses the foibles of governments and crises in confidence to demonstrate his thesis.

Does one understand money better as a social technology or as a commodity that is part of human culture?  Both views are equally instructive, and they are not mutually exclusive. Martin does an admirable job tracing the development of money and credit and the role of government in issuing and guaranteeing both.

The biography of money begins with ancient time and dwells for a few chapters on the competing philosophies of the 19th century. With a view toward explaining its evolution into electronic blips, the author defines money as comprising “a concept of universally applicable economic value; as system of account-keeping whereby that value can be measured and recorded; and the principle of decentralized transfer, whereby that value can be transferred from one person to another.”

The concept of “universally applicable economic value” is the weakest component of the study.  Perhaps it would be better to continue to understand money as a specialized commodity, which has a changing relative price to everything else we buy and sell. But this does not detract much from the overall argument or from the fascinating historical examples that make up most of the book.

It seems that Martin originally wrote this book as his doctoral dissertation, and it suffers slightly from the tendency of first books to include every idea and observation the author thought of during his research. While the history of writing in Mesopotamia and the development of standardized weights and measures in the 19th century are fascinating stories, their detailed exposition may not be necessary to Martin’s argument. And at times these stories may cause the reader to lose track of the point being made.

This is not the first modern book on money, and it is not the last word, but it is a very good study and well worth reading. When an economist argues that money is inherently a social phenomenon, that is reason enough to read the book. That Martin does so cogently, with rich historical detail, and in plain language makes for a compelling case.