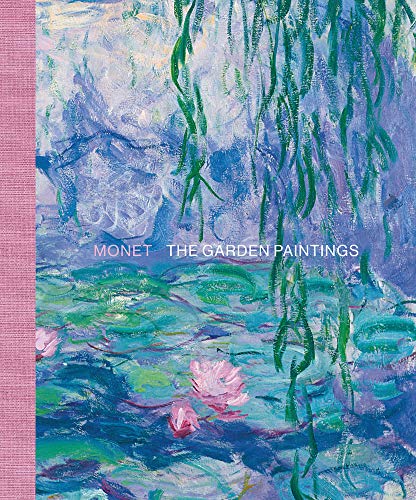 “Monet: The Garden Paintings makes a charming exhibition souvenir and a perfect memento in reverence to a prominent and beloved artist.”

For the purpose of a museum (the Kunstmuseum Den Haag, the Netherlands) exhibition catalog, Monet: The Garden Paintings checks all the boxes: dozens of beautiful illustrations with facts and notes, period photographs, Monet-ism quotes, basic biography, and educational essays.

Claude Monet (1840–1926) led a long and robust painterly life, exhibiting from his early 20s until his death at 86 years old. This book picks up with Monet’s work once he relocated to the countryside in Giverny, France, midway through his career (1883). Most people thought he was crazy to leave the bustling center of the urban art scene, but his dealer thought him a genius and invested heavily in the experiment, hoping that Monet would deliver an entirely new oeuvre; an investment that eventually—though not initially—payed off.

Each of the three authors contribute a total of four essays that handle a unique entry point to Monet’s Giverny. The first essay touches on how Monet and his unusual family came to be residents of the small town. It then ventures into his artistic subject matter interests which ultimately evolved into his preference for painting his home-grown gardens and ponds.

The second essay spreads out from the location-driven discussion to the stylistic developments at play in the middle of the 19th century. The interest here is where Monet is seated in the realm of art historical inventories: Pre-Impressionism, Impressionism, Abstract, Color Field, etc, and the impact of time and space on modern thinking philosopher-artists. Monet’s paintings are highly pertinent to all of these areas, and the final series of paintings are now seen as his pinnacle of achievements.

Breaking out with the final paintings of Monet’s career, the third essay details Monet’s obsession with water, nature, and nature’s reflection in the water. These late paintings have a story to tell which spans both personal calamity (blindness) and political crisis (war). The reader tracks along as the story unfolds along path of provenance of Wisteria until it lands in the hands of the museum which determines to x-ray the painting, revealing a discovery that further endears the viewership.

Finally, the fourth essay explains why Monet’s late art was such a non-entity at his death but now it enjoys the prestige of being the “Basis of Modern Art.” “Monet’s work from Giverny was deemed vague, empty and soulless, a faux pas for which the great painter must be forgiven . . . The monumental water lily paintings, previously an entirely overlooked part of Monet’s oeuvre, actually became his most sought-after trademark images.”

It is truly remarkable how such a reputation can be posthumously magnified, but then again, that is quite common in the art world, which consistently ranks deceased artists higher than those still living. In Monet’s case it was the contemporary artists (Newman, Pollock, Rothko) that elevated Monet, resurrecting his legacy from the dustbins.

Monet: The Garden Paintings makes a charming exhibition souvenir and a perfect memento in reverence to a prominent and beloved artist.