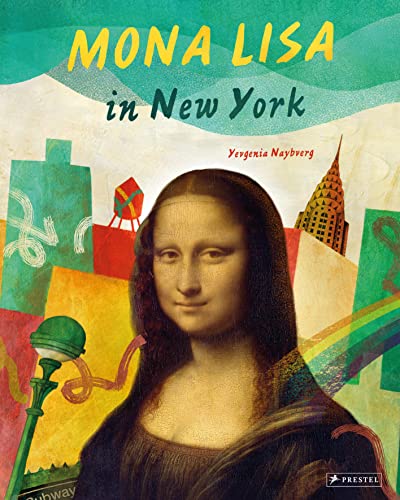 “Nayberg brings her zany wit and artistic ingenuity to this fun romp through art history and New York City.”

Yevgenia Nayberg brings her zany wit and artistic ingenuity to this fun romp through art history and New York. The plot is simple: the Mona Lisa is shipped from her home in the Louvre Museum in Paris to a temporary exhibit in the Metropolitan Museum of Art in New York city. On the last day of the show, Mona Lisa decides she’s tired of being looked at and wants to do some looking herself. She slips out of her frame to explore New York. Sadly, she doesn’t find much to interest her until she meets a fellow called Tag. Like the Mona Lisa, Tag is a painting, although, as his name suggests, he is graffiti, not a museum piece. Low art meets high art as the two explore all that the city has to offer, and Mona Lisa comes to recognize that she’s had enough of the stuffy museum world—she’d rather be on the street in New York, becoming graffiti like Tag is.

It’s a clever concept and Nayberg’s art enriches the blend of high and low by sneaking in other masterpieces from the musuem world, so that portraits by Botticelli, Van Eyck, and Ghirlandaio, among others, join the crowds scattered through the pages. The reader doesn’t come away with a new appreciation for Renaissance art, but a fresh delight in New York and the diverse culture the city offers.

The moral of the story, if there is one, is that being a snob is boring. Why not get off your pedestal and see what is out there? Leonardo would disagree with this characterization of his masterpiece, but Nayberg pokes fun of the snooty art world and how it commodifies images, how something is considered interesting because it is well-known, how viewers take photos of masterpieces, crowd around famous images, without really looking at them. Art, after all, needs to be looked at, really looked at, to be experienced. And Mona Lisa learns to do some careful looking—and listening—herself. Here’s hoping young readers do the same.