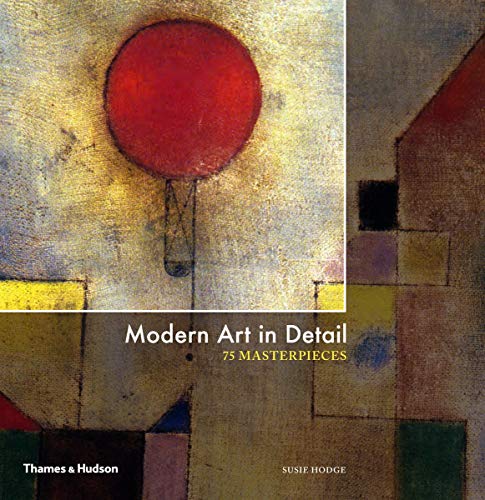 Susie Hodge, with her depth and breadth of experience in art history, delivers an approachable panorama of an enigmatic category of art history referred to as Modern Art.

The Modern Art tag accounts for many styles and movements from 1890 to today including Impressionism, Cubism, Surrealism, Expressionism, Pop, etc. The term also encompasses a variety of media and technical developments in sculpture, painting, collage, video, installation, etc. Modern Art, at its core, continually reshapes the understanding of what it means to create fine art. In this vein, Hodge chose “cutting-edge” artists who “broke dramatically with accepted . . . styles and methods.”

Each of the 75 artists is allocated a full color reproduction of their art along with a roughly 250-word statement of biography, artistic approach, and contextual setting.

There follows a full page spread with the artwork cut up into seven or so key elements which, depending on the piece, explore aspects of ideology, symbolism, technique, material, influences, etc.

Hodge pulls back layers of significance for the reader as if walking through a museum with a knowledgeable, engaging docent. She reveals just enough information to make the tour interesting, but not too much to make it overwhelming.

The early artistic selections are as one would expect. Starting with The Church in Auvers-Sur-Oise (1890) by Vincent van Gogh, Hodge sets a high standard. Van Gogh tackled many issues head on. He was unique in perspective, color, method and intensity while battling personal demons and a ruthless art community.

Paul Gaugin and Claude Monet are the other two artists included with van Gogh in the opening Late 19th Century chapter. The assumption made is that they are now accepted as the exemplary avant-garde of their era, critical in pioneering Modern Art, allowing for subsequent artists to be divergent thinkers.

Early 20th Century and Post World War II artists comprise the bulk of the material. From 1900 to 1965 there is no shortage of widely accepted masters, with Paul Cézanne, Gustav Klimt, Henri Matisse, and Pablo Picasso leading off this phase.

The Late 20th Century and particularly the Early 21st Century chapters (art from 1968–present) contain just a handful or two of selections. The focus of media shifts dramatically away from painting and includes video, abstract sculpture, and conceptual installations from artists who are far from known entities. Yahoi Kusama, Mona Hatoum, and Yinka Shonibare Mbe have yet to gain reputations as present day Dalís, Warhols or O’Keeffes. Their contribution to the bigger picture is iffy.

Lacking artistic conviction, the Early 21st Century chapter falls loosely away. It seems to indicate that the years 2000–2017 are waiting in art history limbo. These 17 years of artistic productivity yielded only five artists for the chapter while the time span from 1900–1917 yielded five times as many with dozens more to choose from.

Likely this is because the broader significance of these particular 21st century artists is debatable. Can Bill Viola’s Martyrs temporary video installation in St. Paul’s Cathedral in London really be designated a masterpiece equal in merit to an Alexander Calder sculpture or an Edward Hopper painting?

Besides the obvious digital invasion, what concerns today’s artists? There is no telling, and Hodge avoids such commentary by excluding, with one bizarre exception (Hirst), artists born after the early 1950s, with only 10 of the 75 artists still living.

The inclusion of Damien Hirst’s (b. 1965) The Physical Impossibility of Death in the Mind of Someone Living, basically a dead tiger shark enclosed in a tank of formaldehyde, is, unfortunately, the only representation of Generation X’s contribution to Modern Art, and an inconclusive representation at best.

Is Hodge continuing her line of assumption-making that Hirst is the 21st century’s avant-garde, critical in pioneering a new spin-off of Modern Art? Certainly not; Hirst is by no means indicative of the originality of this generation.

Perhaps the Modern Art umbrella term has exhausted itself. Could this period finally be coming to a close? After all, how is it possible that van Gogh can be categorized with Hirst; Calder with Viola; or Gaugin with Shonibare?

The next 100-year span will doubtless have its own way to challenge, probe, shock, and compel. The 21st century is no different from the 19th or 20th in this respect. The independent spirit and compulsion to create remain ever present and unchanged.

What Hodge does very well is to build a foundation for understanding the directions that are possible and inevitable for today’s artists. She generates excitement for the future of art and the infinite potential that exists in a world of unprecedented instant communication and globalization.

Hodge has prepared for the reader of Modern Art in Detail: 75 Masterpieces a concise consolidation of art so that they may be poised to appreciate the artistic diversity already emerging on the cusp of a new era.