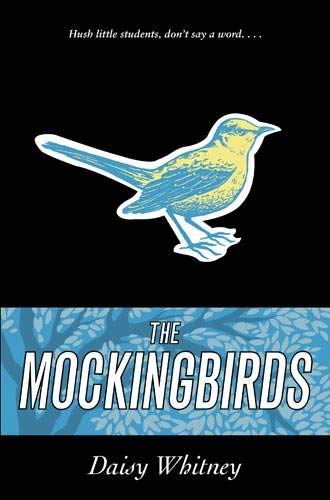 The Mockingbirds is Daisy Whitney’s debut novel—and what a debut it is. Young adult literature today is awash in tales of the paranormal; The Mockingbirds is contemporary, dramatic—and based on real-life issues. The core of the story focuses on an event that happens to young women every day: date rape. Indeed, the author herself was a victim of such a crime, and she refused to accept the violation without fighting back—much as her protagonist, Alex Patrick, does.

Alex is a junior in Themis Academy, a boarding school. She goes out for a night on the town. It starts off great, but one drink too many leaves her in a complete fog the next day. Now she has to wrack her brain to understand how she ended up naked in the bed of a boy she doesn’t know. How far did things go? The two empty condom wrappers she spies in the garbage can don’t bode well, and leave her with feelings such as dread and an impending sense of doom.

Alex has so many questions, so she starts by asking them of herself. How could she go out with a great guy for six months, hold back with him, and then leave that relationship a virgin, but end up having sex for the first time with a guy she doesn’t know? And why can’t she remember what took place? Well, maybe that’s a good thing; maybe that’s because nothing did happen? But that mind trick doesn’t last long for there are those empty condom wrappers . . . salacious remarks the boys are making . . . odd glances and whispers. . . .

And Carter Hutchinson is not going to let her forget what happened, because he’s decided to tell everybody. And he’s telling them she wanted it—badly. It’s time for action. It’s time for the Mockingbirds. The Mockingbirds specialize in their own special brand of vigilantism. They’re a secret group of students committed to doing what the Themis Academy can’t or won’t do: enact justice for the student body.

Daisy Whitney addresses a serious issue in a forthright manner. She is not gratuitous in her description of the assault as it plays out via flashbacks, but she doesn’t shy away from the truth of it, either.

The topic of date rape is not original, but Ms. Whitney’s mode of addressing it in her story certainly is. The idea of this student group and how they are going to handle such a serious offense raised questions in this readers mind. It is impressive how the author anticipated it and quite sequentially, addressed each one.

The Mockingbirds is suspenseful and full of true-to-life drama. Most of all, it is a validation as well as a comfort to those who have found themselves in this most unfortunate of situations. It is possible to stand up for what’s right and speak up for oneself.