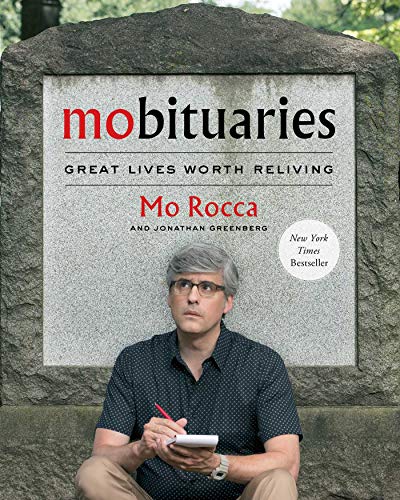 “Mobituaries is droll, ironic, silly, poignant, and thoughtful all at once.”

A well-written obituary is a marvel of composition, encapsulating in just a few short paragraphs the grandeur or villainy of a life. But cultural prejudices have long denied the final word of many important figures throughout history, an exclusion that even The New York Times is correcting with its obituary series “Overlooked.”

And then there’s Mo Rocca. His new book Mobituaries: Great Lives Worth Reliving (written with the assistance of Jonathan Greenberg) takes neglected obituaries to new heights. Rocca extends the definition of death into extremes that are both logical and comical, and always respectful to the subject.

The book, based on Rocca’s wonderful podcast (or his wonderful podcast based on this book as many of the entries are repeated in both media) looks at the demise of people, places, objects, and even a few intangibles that only existed in humanity’s collective imagination. All had vast cultural impact and—as Rocca deftly shows—their respective departures merit attention.

If you’re familiar with Rocca through his appearances on Comedy Central’s The Daily Show, various CBS television newsmagazines, or the NPR quiz show “Wait, Wait, Don’t Tell Me,” you can practically hear Rocca’s amusing, slightly nasal voice on the page. Playing off the obvious alliteration of obituary and his first name, Rocca writes: “Mobituary is an appreciation for someone who didn’t get the love she or he deserved the first time around.”

That missing appreciation cuts a wide swath of deaths. He celebrates iconic figures who had the misfortune of passing away during heavy news cycles of other impactful events. Audrey Hepburn’s death was lost in the hoopla of Bill Clinton’s first inauguration. The end of Farrah Fawcett’s public fight against cancer on June 25, 2009, should have received more respect. But her death was quickly swallowed up a few hours later in a media tsunami when it was announced pop superstar Michael Jackson also died that day.

But there’s more to death than dying. Rocca celebrates the afterlife of the deceased and their sometimes very personal effects. One chapter sidebar is devoted to famous body parts are not interred with the rest of the remains. For years the doctor who performed Albert Einstein’s autopsy kept the scientific genius’s brain at his home in a pair of mason jars stored inside wooden box. The heart of King Louis XIV was purchased by artist Alexandre Pau, who ground it up like hamburger and added it to a shade of paint appropriately named “Mummy Brown.” Grover Cleveland’s cancerous jaw, removed in a secret operation, is on display in a medical museum.

Best of all is the middle right-hand finger of Galileo Galilei, which was clipped off the body when it was reinterred and moved to a bigger monument nearly 100 years after Galileo’s death in 1642. The digit was swapped around through the centuries, and ultimately ended up in the collection of the History of Science Museum in Florence, Italy. Galileo, as history tells us, was called a heretic by the Vatican and died a prisoner for championing his theory that planets revolved around the sun and not the other way around. “I like to think [the middle finger] continues to send the message ‘Hey, Pope Urban VIII, revolve around this!” Rocca writes.

Some of the entries are trailblazers whose importance was neglected over decades of cultural change. Elizabeth Jennings, a 19th Century African American woman who lived in New York, preceded Rosa Parks by just over 100 years. On July 16, 1854 Jennings would not relinquish her seat to a white patron on a crowded horse-drawn bus. Both streetcar employees and police officers tried using force to get Jennings to move. Jennings refused acquiescence to the unwritten rules of race and public transportation. She became a cause celebre when Jennings took her story public in civil court. An all-white jury of ten men sided with her, awarding Jennings $250 in damages. One newspaper of the day called it “a wholesome verdict.”

Other items are more whimsical. Rocca recounts a series of sports teams that are no more for various reasons including the Philadelphia Sphas (1927–1959), a basketball team whose unusual name reflected that the game was once considered the provenance of Jewish players. The moniker came from initials of the South Philadelphia Hebrew Association.

Not to be left out, the sad demise of Rocca’s own ill-fated little league baseball career is chronicled by his older brother, guest contributor Lawrence Rocca. “My brother was not a great baseball player, nor a particularly enthusiastic one,” writes Rocca the Elder. “He knew early on that his first season of CYO baseball would be his last.”

The imaginary and the real had their time in the sun and as far as Rocca is concerned attention must be paid. Dragons. The medical diagnosis of “wandering womb” which could result in female troubles. Station wagons as the go-to family car. The sudden cancelation of the 1960s primetime troika of country-themed sitcoms The Beverly Hillbillies, Petticoat Junction, and Green Acres, all of which died when network top gun Fred Silverman decided that the CBS lineup needed more sophistication for the growing urban audience. All had their time in the sun. All should be given their due.

Mobituaries is tinged with poignant moments, such as career death of comedian Vaughn Meader. His uncanny impersonation of President John F. Kennedy made Meader one of the most popular entertainers in America. His two hit albums, The First Family and The First Family Rides Again still hold up as a gold standard for presidential parody.

Despite his enormous success Meader felt trapped as an entertainer and looked for ways to expand on his repertoire. Show biz journalists were puzzled as to why Meader would want to abandon his cash cow. Noted Hollywood reporter Bob Thomas wrote a story with the lede: “It’s always a bit surprising to find a new star in show business trying to run away from the thing that made him famous. Today’s example is Vaughn Meader.” The article was printed on the morning of November 22, 1963. By nightfall Meader’s career was changed with bitter irony.

Meader spiraled into a haze of alcohol and drug abuse before reemerging on the fringes of entertainment in such projects as the exploitation film Linda Lovelace for President. But the comeback was not to be, and Meader dwelled in obscurity.  In 1998 he was approached by reporter Paula Zahn for an interview. Asked by producer Kevin Huffman to do his most famous character, Meader gave an unexpected response with a moving elegy to all we lost as a nation on that terrible November day. You can hear the Kennedy voice in this improvised soliloquy, which Rocca includes in the book.

Meader died six years after the interview, a forgotten footnote in show business and American culture. “To hear Vaughn Meader in his prime,” Rocca writes, “to hear that clever and charming—if hardly radical—comedy album, is to travel back to an era that today feels, sweet, disarmingly innocent, and yes, funny.”

Mobituaries is droll, ironic, silly, poignant, and thoughtful all at once. This isn’t a book to read cover to cover, though that’s certainly not a bad route to take.  Rather, it is a volume of delights that is best savored by skipping through the chapters at your own pace.

Take a stop at Rocca’s imaginary Mt. Rushmore of bad presidents. Discover the musical assassination of a once renowned opera composer who was undermined by his rival Richard Wagner. Follow the trail of Chuck Cunningham, the older brother on the 1970s sitcom Happy Days, whose strange disappearance following season one was never mentioned by any of his family or friends after he ceased to exist. All this plus the diagraming of a sentence of what Rocca imagines will someday be the obituary of Bill Cosby, America’s fallen TV dad.

Death comes to everyone and everything. Mobituaries takes delight in that sting.