The Mistresses of George I and II: A Maypole and a Peevish Beast 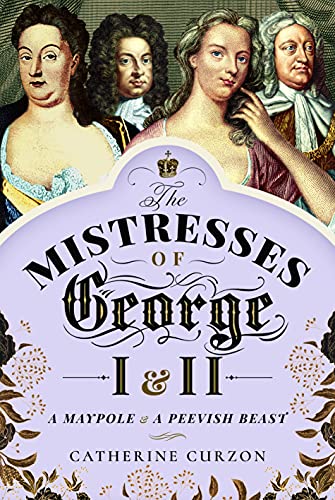 “The author explains the important feminine side of a royal court with the histories of two of the mistresses of Great Britain’s famous monarchs, George I and II.”

“Marriage was a serious business” among royals according to Catherine Curzon, for “the line of royal secession is the key to immortality.” In The Mistresses of George I and II, this author tells the colorful story of the problem no male ruler shares with his wife, the issue of mistresses. This work comes out at a time when the history of the treatment of women is front and center in modern society.

In the 17th century a woman’s worth “came from their value as a bride.” Curzon “should she become a mistress, her future marriage prospects would be undeniably dented.” Women became mistresses to gain power, status, and wealth although also out of genuine affection.

The author explains the important feminine side of a royal court with the histories of two of the mistresses of Great Britain’s famous monarchs George I and II. Daughter of minor nobility, Ehrengard Melusine von der Schulenberg was raised in “training for a wife.” She “spent her childhood educated in the necessary feminine arts . . . for the throne room and the drawing room alike.”

“There was little remarkable” about Melusine that would foretell of her as a social climber. Her lack of ambition likely made her attractive to the “taciturn, sullen” “phlegmatic, emotionally withdrawn” future king. He appreciated someone who did not argue with him rather than “a woman who might strike out on her own.” Critics described her as “a venal, conniving shrew” “out to capture a man with power and money,” and “a dull pliant creature.”

Melusine’s great relationship was “more than that.” “She became a surrogate wife” while George’s real wife was only “a necessary evil.” Melusine bore George I three daughters and, after he became King George I in 1714, he made her the Duchess of Munster and later the Dutchess of Kendal.

From “genteel, ennobled poverty,” Melusine would “become a queen in all but name,” “as close to one of the most powerful thrones in the world as any uncrowned, unmarried mistress could get.” She “rose higher than she might ever have dreamed” as the mistress of George Louis of Hanover (later George I).

George Louis was the product of the complicated politics, framed in sex, to bring Hanover to the status of electorate of Hanover and to make it a Venice of the North, “that would rival the Italian city for romance and intrigue.” Hanover became an electorate in 1692.

The worse than loveless marriage of George Louis to Sophia Dorothea on November 22, 1698, produced heirs to further those aims. The marriage had essentially ended but not yet by George’s wife’s adultery, a murder, and divorce when George met Melusine in the 1689.

Melusine was tall “placid and patient” while George was “brooding and bad tempered,” violent, “undemonstrative, and frankly rather short.” She was not the first mistress of the older George. this mistress became a player in the reign of George I, including in the South Seas Bubble and the Irish coinage debacle. She “sold titles and favors to the highest bidder as a matter of routine.”

Henrietta Hobart, born in 1689, came from a financially desperate Norfolk noble family beset with recent serial tragedies. She married Charles Howard, a British officer with a scandalous reputation, in 1706.

Charles’ fortune (and what he took from his wife) “went into the coffers of the nearest brothel or was lost at the gambling tables or drank away in a London tavern,” leaving Henrietta and their son Henry destitute and often forced to live in slums. “He abused, enslaved, and tortured her.”

George I saw them as “fortune seekers who sought his favors only for their own ambitions.” Henrietta and her husband Charles, however, returned to England from Hanover as “members of the new King’s coterie” with positions at court in 1714.

Henrietta Howard became one of George Augustus’ (later King George II) mistresses despite his love for his forceful advisor and wife Charlotte of Ansbach. Henrietta served this then Princess of Wales as “Woman of the Bedchamber” (Charlotte’s body servant and confidant). Nonetheless, the “sullen and hot-tempered” George “loved the company of women, none more so than his wife.”

Conflicts between George I and George Augustus that resulted in her having to leave her husband, her first stand against Charles Howard’s “cruelty and tyranny.” She depended upon and became prisoner of Princess and later Queen Charlotte for protection from husband Charles Howard.

Henrietta Howard flourished away from her husband, however, except “for the dreadful price” that he took their son and for the public scandal. She “avoided intrigue and factionalism, instead remaining as neutral as possible” and prospered financially.

Henrietta Howard did not like her position, however, and came under regular abuse from Charlotte. The relationship with George II was scheduled daily but went on without passion and possibly without sex. She “could rebel all she liked but, ultimately, . . . she was powerless.” Howard over time finally escaped Charles, Charlotte, and George II. She helped with and was a guest at the coronation of George III in 1761.

This work is annotated extensively, often from original sources, illustrated, and with an extensive bibliography. The author could have improved the readability with more use of dates. Font and general physical appearance of the book, however, are only basic, and do not match the quality of its thought provoking narrative prose and its research.