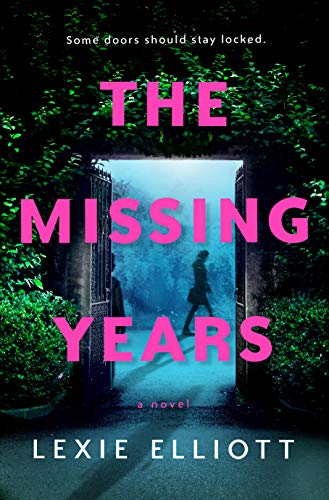 “The Missing Years begins with a Gothic hint that rapidly segues into a suspenseful thriller with a breathless twist of a dénouement.”

When Alisa Calder was seven, her father disappeared and was never seen again. Eventually, her mother remarried, giving Alisa a half-sister and a concerned stepfather.

Twenty-seven years later, Alisa is estranged from her family, and her mother has died, leaving her half-owner of The Manse, an old Scottish house in the middle of nowhere. Alisa would sell the property, but there’s a catch; the other half of The Manse was left to her missing father.

To expedite a sale, she must have her father declared dead, and while she’s hesitant to do so, Alisa is rapidly leaning toward that notion. In the meantime, she’s invited half-sister Carrie, now an actress, to stay with her and commute to Edinburgh where she’s performing in a play.

From the beginning, The Manse is an unsettling place, aside from the memories Alisa has, and with good reason. The first night, she discovers a stranger wondering the halls.

He’s Jami McCue and his excuse for being in The Manse is that he’s looking for his sister.

“Sometimes she comes here. She’s a wee bit different, not a tinnie short of a six-pack but a wee bit away wi’ the fairies. I couldnae find her and I thought she might be here. She has a thing about this place.”

Fiona’s “fascinationz” with The Manse isn’t explained, nor how Jamie got inside. Wandering fey sister excepted, there are other disquieting occurrences—ashtrays filled with cigarette butts that neither Alisa or Carrie have smoked, boxes that have been open and stashed in an attic room, the way animals avoid the garden boundary marked by a stone wall, hostile neighbors, and a newspaper from the day Martin Calder disappeared, marked in red and left on the doorstep.

Other than their curiosity, everyone else is mostly friendly, however, including the fey Fiona who soon becomes Carrie’s close friend, while Alisa and Jamie cultivate a friendship though Jamie obviously would like it to be more. Though Alisa has a significant other in the person of Jonathan Powell, a television journalist for whom she is field producer for the BBC, she finds Ben Rankin, manager of the Kingroissie Hotel, and friend from her childhood more interesting romantically. And there’s Alistair, who seems to take a dislike to Alisa for no other reason than that her name is Calder.

An aura of unease hovers and the disquieting little events of things witnessed only by Alisa and no one else continue.

Alisa can’t be certain whether what is happening is linked to her father’s disappearance or whether her dislike of returning to the Manse is making her imagine danger where none exists. So far no one else has witnessed any of the things she says have happened, but she can’t help thinking that some time very soon, all her questions will be answered, and not in a way she will like.

The Missing Years is a slow-starting book that takes a bit to get going but this isn’t necessarily a bad thing, because there’s a great deal of exposition the main character has to reveal to set events in motion. Each action is carefully laid out in a way making the reader anticipate what will happen but when it does, s/he’s startled to discover it doesn’t occur quite as s/he expects.

All the players in the drama from Alisa to Fiona, and even Jonathan, Alisa’s significant other who’s mostly witnessed more or less remotely more or less via the newscasts he reports or in flashbacks, are meticulously characterized so the reader thinks he knows well how each will act—and is then proven cleverly wrong.

Separating the chapter is a bit of fantasizing on Alisa’s part, as she imagines where her missing father is and what he’s now doing. Some are truly heroic and some mundane, but as the climax of the story approaches, they become more realistic, until that final, blunt statement of fact comes crashing in.

There’s only one minor detail with which one might take exception. When Martin Calder’s fate is finally discovered, it’s more or less brushed aside with bare legal amenities. One feels there should have been more done than a mere summoning-up on that matter.

With its growing atmosphere of dread and its moody environs, The Missing Years begins with a Gothic hint that rapidly segues into a suspenseful thriller with a breathless twist of a dénouement.