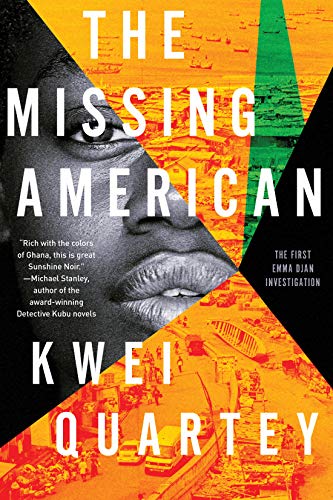 “The debut of a new series protagonist is always an event filled with hope and the promise of great reading to come, but The Missing American unfortunately misses the target.”

American Gordon Tilson is the victim of an Internet scam. A former Peace Corps volunteer posted to Ghana who now lives in Washington, DC, Gordon still misses his late Ghanaian wife. As a result, he can’t help but be attracted to Helena, a Ghanaian woman he meets online. When she tells him her sister has been badly injured in a car accident and can’t afford the medical bills, Gordon generously helps out.

Smitten, he travels to Ghana to meet her in person, but she fails to show up at the airport or his hotel. He immediately loses all contact with her and reluctantly admits he’s been victimized by a sakawa boy, a Ghanaian online swindler.

Angry and ashamed, he decides to remain in the country to track down the person or persons behind the scam. But when he disappears without a trace, his son follows him to Ghana and enlists the support of Yemo Sowa’s private detective agency in Accra to find out what’s happened to him.

Can fledgling detective Emma Djan, Sowa’s latest hire, navigate the dangerous world of online scams and the bizarre phenomenon called sakawa, the use of magical powers to enhance one’s success in the swindling business, to track down Gordon Tilson and uncover the individuals behind his disappearance?

The Missing American is the first novel in a new series by Kwei Quartey, the author of five Inspector Darko Dawson Mysteries including Wife of the Gods (2009) and Death by His Grace (2017).

Quartey uses the novel as an opportunity to explore several interesting themes, including corruption at the highest levels of government and the police, fetish priests and their rituals, and autism among Ghanaian children. As in the Darko Dawson series, he provides authentic flavor through Ghana’s food, colorful clothing, and distinctive landscape.

Emma Djan, however, is a far cry from Darko as a crime novel protagonist. Where Dawson effectively brought out a gritty, hardnosed edge to Quartey’s writing, Emma’s callow and deferential personality is not quite charming enough to carry the day.

While she has enough gumption to walk out of her police job when the director-general calls her into his office and sexually assaults her, and she shows the stick-to-it-iveness to persist in her search for Gordon when Sowa’s agency is directed to stand down, Emma makes us feel as though we’ve picked up an Alexander McCall Smith cozy by mistake.

Somewhere in a rough neighborhood of Accra, Darko might be leaning against a wall in an alley, taking a long drag off a joint, but it’s definitely not a part of town in which we’ll expect to see Emma Djan turn up any time soon.

Despite Emma’s somewhat disappointing nature, however, the primary problem with this novel centers on its plot construction and storyline.

The novel opens with the assassination of Bernard Evans-Aidoo, the leading opponent of President Bannerman in the upcoming national election. A sniper trained by the Ghana Police Service’s SWAT Panther Unit puts a bullet through his head from a gabled roof on top of a bank.

Wonder why we haven’t mentioned it before now? Because it’s not mentioned again by Quartey for the next 75 pages of the novel. He leads with it, then jumps back a day in the timeline to follow his other plot threads, and as the timeline chugs past assassination day and careens on into the future, no one talks about this profoundly shocking event. No one!

Is assassination such a commonplace in Ghana that it attracts basically zero attention? Surely not. One would expect the subject to be mentioned, even peripherally, in conversation here or there. A brief allusion. If not among ordinary citizens, then at least within the law enforcement community. But it’s not.

Even more problematically, the timeline jumps back and forth so frequently between Gordon Tilson’s activities before his disappearance and the efforts of Emma, son Derek, et al. to track him down afterward that it’s absolutely essential to check the subtitles at the beginning of each chapter to see which month we’re in. March? July? April? June?

At the end of the day it’s really, really, very poor storytelling.

The debut of a new series protagonist is always an event filled with hope and the promise of great reading to come, but The Missing American unfortunately misses the target. Emma Djan, who shows flashes of promise despite her cozy treatment, deserved better.