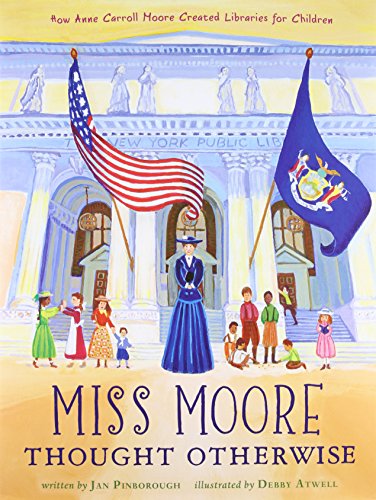 In her pleasant picture book biography, Jan Pinborough’s debut highlights a woman who transformed libraries from hushed rooms designed for polite adults to vibrant environments that include children—with all their wild imagination and energy.

The child from Limerick, ME, who loved heart-thumping toboggan rides as well as the stories her father read aloud would one day pack her bags to attend the Pratt Institute library school in Brooklyn. She chose one of the few professions open to women in the early 20th century: library studies.

She first worked at the local Pratt Free Library, which had, to her mind, a delightful new feature: a library space just for children. In an era in which other librarians cultivated the reading interests of only adults, “Miss Moore thought otherwise”—a refrain Ms. Pinborough uses to delineate how her approach differed from that of the majority.

Word spread about Miss Moore’s abilities, and in time she was hired to oversee the children’s departments in all 36 branches of the New York Public Library. Finally she was in a position to make changes that would have an impact on thousands of families.

To her dismay, she found many librarians still did not allow children even to touch books, let alone take them home. She set about changing that.

Unlike her contemporaries, Miss Moore did not believe the library was meant to be as quiet as a tomb. One cheerful, full-page painting shows Miss Moore in her floor-length skirt helping to take down a huge black sign with the word “silence.”

She urged librarians to talk to children, to tell them stories. And what about those dull books no one wanted to read? Out with them! Instead, she brought in the likes of Tom Sawyer and The Swiss Family Robinson to satisfy children’s taste for adventure.

Then came a once-in-a-lifetime opportunity. A grand new library would be built at the corner of Fifth Avenue and 42nd Street. Annie Moore had the chance to create the very best children’s library for New York City’s youth.

The innovations she introduced at the New York Public Library have now been adopted around the world. Such logical features include child-size furniture, bright, attractive artwork and displays; the inclusion of cozy seating; and kid-pleasing book collections. Reading clubs and visits by talented performers, artists, and authors enlivened the children’s room, then and now.

In her interesting afterward, Ms. Pinborough notes that in reality, Anne Carroll Moore was one of a number of strong, independent women librarians who revolutionized children’s library services.

What distinguishes this woman, she asserts, is her “unique combination of intelligence, imagination, and ambition – coupled with her connections with authors, illustrators, and publishers and her situation at the iconic New York Public Library. . . .”
In his 1959 “Poema de los Dones” (“Poem About the Gifts”), Jorge Luis Borges compared paradise to a library. Thanks to leaders like Anne Carroll Moore, we can all enter that heady realm here and now.