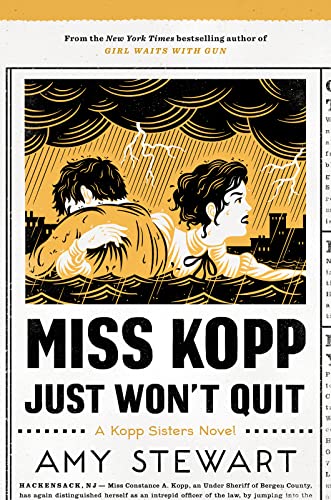 Miss Kopp Just Won’t Quit presents a feisty, eccentric woman in the fall of 1916, way before women’s lib was even a term.

Constance Kopp fearlessly plows through her day as the first female deputy sheriff in New Jersey, following her instincts toward justice and confident that she’s on the right path. The story opens on her dangerous rescue of a prisoner who has tried to escape and ends up in a fast-flowing stormy river and, in handcuffs, practically drowns. When Constance heroically rescues him in a feat of strength, stamina and “just won’t give up” swimming, it’s still not enough to win her the accolades she deserves, but paradoxically, she doesn’t really care to get them. Her prisoner, meanwhile, tries to commit suicide with a broken spoon and the following day, is sentenced to Morris Plains, the mental institution.

Instead of awarding her a medal for her bravery, the men in power call her “demon deputy” and “troublesome lady policeman” in an effort to sway public opinion by scapegoating an uppity woman as a disgrace to the office of the sheriff. Historically, it’s interesting to observe dirty election strategy at the turn-of-the-century, using the general misogyny that was alive and well at the time.

Sheriff Heath meanwhile, (taken from a real, historical person of the same name), is ever constant, loyal, and fair and runs a pretty tight ship at the jail. He encourages Constance to do what she does best, which is overseeing the incarcerated women in their care and helping them straighten their lives out. Against this backdrop, an election campaign is underway, and there is the threat of Sheriff Heath losing to conniving politicians.

As an historical novel, Miss Kopp Just Won’t Quit presents a lot of the detail of the time as well as state of being a woman through the various female inmates; a group of unionists take their incarceration as a political statement and the reader learns about factory conditions in the sweat shops of the day. We glance into the lives of prostitutes and petty thieves, women in abusive relationships—one who accidentally murders someone who steps in front of the gun aimed at her husband; she is then relieved to go to jail because she knows at least she’s safe.

The most interesting aspect of the book is the way women moved in society. Of course they were still completely dependent upon their husbands unless they were somehow gainfully employed. Lest we forget, women’s work was menial and often not paid at all. Perhaps the best example is the intrigue about the female prisoner who is to be delivered to Morris Plains, a mental institution, on the orders of her husband—and without any examination from a doctor. This story was based on the life of a woman who was sent away in like manner so her husband could have affairs with other women. Here, Constance rightly smells abuse and tracks it down. From a modern perspective, it seems almost unbelievable that women had so few rights. The author, Amy Stewart, who has written nine books, relied on newspaper stories, public documents, newspaper articles, wills, and birth certificates to find the details that begin the tale.

This is the fourth installment of the Kopp Sisters series, but it’s easy to understand without having to read earlier novels in the series. The three Kopp women, Constance, Norma and Fleurette, (Constance’s child, born out of wedlock), who provide colorful background to Constance’s daily routine, are real historical figures. It’s a bit of a lighthearted romp; the language and descriptions never make the reader feel truly uncomfortable that things won’t turn out all right.

The talented author has made a well-researched, rollicking story out of the three of them and Sheriff Heath, so that the reader can experience a flavor of life for women in the early 1900s in New Jersey just before the war.

Small details of the time, perfumed salts and soaps in a hot bath, vinegar rinse as hair wash, the impending war and Plattsburg camps, military style training camps for men who wanted to go war, if and when the US committed. Especially delightful were Mrs. Pattengill, a madame who held the secrets of men in power, and Constance’s sister Norma and her pigeons.