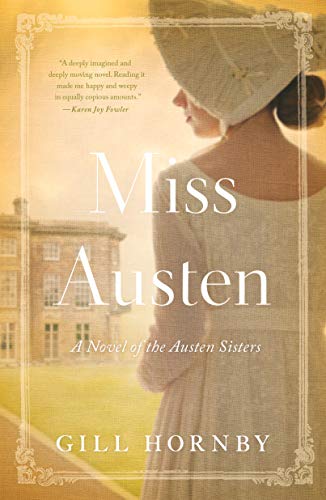 “an extra ordinarily charming adaptation of one the most overlooked and most important people in Jane Austen’s life . . .”

England, 1840. For the two decades following the death of her beloved sister, Jane, Cassandra Austen has lived alone, spending her days visiting friends and relations and quietly, purposefully working to preserve her sister’s reputation. Now in her sixties and increasingly frail, Cassandra goes to stay with the Fowles of Kintbury, family of her long-dead fiancé, in search of a trove of Jane’s letters. Dodging her hostess and a meddlesome housemaid, Cassandra eventually hunts down the letters and confronts the secrets they hold, secrets not only about Jane but about Cassandra herself. Will Cassandra bare the most private details of her life to the world, or commit her sister’s legacy to the flames?

Miss Austen by Gill Hornby is a touching and exceptionally well-researched fictionalized account of Cassandra Austen’s life, both before and after her famous sister’s death. Hornsby is the critically acclaimed author of several novels that include The Hive (2013), All Together Now (2015), and the young readers biography Who Was . . . Jane Austen: The Girl with the Magic Pen (2009).

Alternating between the past and present, Miss Austen begins with an aged Cassandra Austen, as she travels to the tiny village of Kintbury in West Berkshire. There she visits Isabella, a family friend and niece of her late fiancé Tom Fowle. Isabella's own brother, a local clergyman has recently died, and its learned that she has to vacate the home they shared. Feeling sad and depressed, Isabella doesn't know what to do and is not overjoyed to have to entertain an unannounced visitor. Nonetheless, Cassandra is determined to stay and help Isabella pack and move. But her real motivation in visiting Isabella is to search for and destroy any letters that were written by her famous sister that might be damaging to the literary legend’s legacy.

“She was tired from the day, and quite exhausted by Isabella. But there was little sleep that night. Work must be done . . . All correspondence had been individually arranged, tied into packets with pale blue ribbon . . . She took them out, and there below—a rich rush of love flooded through her—was the writing of Jane . . . There had been a time when Cassandra—grief raw and still smarting—would stumble across some little trace, and the slow-healing wound would break open. . . . But all that had passed. The pain had abated. The practical was here her concern . . . First, and as soon as possible, she would deal with the letters of Jane . . . She unfolded the paper and began to read.”

As Cassandra begins to examine these letters a highly personal journey unfolds in which she is forced to reevaluate her very own life choices. In this highly emotional and entertaining novel, Hornby successfully illustrates the many joys and heartbreaks of both Austen sisters. She does a terrific job of relating how these critically important events helped shaped them both, especially Jane’s literary works.

In Miss Austen, Gill Hornby had created an exceptionally entertaining addition to the Jane Austen legacy. In this exciting new interpretation of historical fiction, fans of the genre will not be disappointed and undoubtably cheer the opportunity to revisit the grandeur and anguish of the extended Austen family. With poignant intricacy and unique perspective, Hornby gives a voice to and brings to life an extraordinarily charming adaptation of one the most overlooked and most important people in Jane Austen’s life, her older sister Cassandra.