The Miniaturist: A Novel 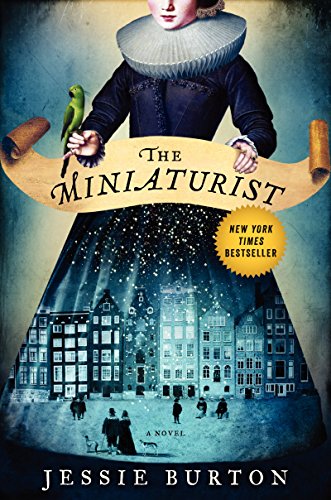 “The Miniaturist is a novel that could easily be read again and again, with awe and surprise stemming not just from the story, but from the author’s brilliant writing and her ability to convey realities of the human condition.”

In The Miniaturist author Jessie Burton offers a vivid glimpse of Amsterdam in the late 17th century. This is a bustling and prosperous community, dominated by the commerce of the Dutch East India Company.

In contrast, she describes a blind boy cleverly filching a herring from a lady’s basket as he “accidentally” bumps into her. Prosperity abounds for some, yet the Calvinist notion of pain and suffering punctuates many lives.

Protagonist Nella Oortman arrives in the midst of all this having been married earlier to Johannes  Brandt in her home town of Assendelft. Nella’s family arranged this alliance “for the sake of her future welfare.” Johannes left the wedding hurriedly to expedite a shipment to Venice, leaving poor Nella to wonder whether her life as a married woman would ever be much different from life in her hometown; nevertheless, she sets off to Amsterdam.

Upon her arrival, there is no one to greet her. She receives a cool welcome from her new family (once she finds the house). She feels so alone. Marin, Johannes’ sister, resents the intrusion of this new family member, yet must force herself to be kind, which she does, even giving up her room. The author captures a rigid sense of societal norms, where one dare not be different nor risk rending the fabric of everyday life. Marin eats dried herring and black bread for breakfast—a reminder of the sufferings man must endure.

Upon returning from Venice, Johannes displays genuine delight and affection at seeing Nella:

“To her astonishment, he takes her in a huge embrace. Nella’s head only reaches (his) breastbone and he presses her ear to where she feels the thump of his heart. Digging his chin onto the top of her head, she finds the awkward hold an unexpected comfort. She has never touched this much of Johannes before. Her feet begin to lift off the floor as if she’s clinging to a raft. . . .”

He presents her with a gift of a cabinet-sized replica of their home, which requires the services of a miniaturist to fill the tiny rooms with true-to-life and sometimes prophetic objects. (Miniatures were a custom during that period, upon which many women relied to predict the future.)

Marin comes forward with a book of lists (like a modern day telephone book), which provides information about the services she needs. Soon tiny objects start arriving, some with astounding closeness to the truth of situations. Who is this artist? And how does she know so much about the family?

Just as Nella begins to conclude certain things about the family, other issues interfere to set her adrift once again. Peering through the keyhole of Marin’s room, Nella sees her eating candied walnuts—not a strange deed in itself, but odd for a woman who publicly consumes herring and black bread as penance.

Cornelia, a servant, is taken in by Johannes but not required to adhere to the social place of household help. She becomes a friend to Nella as does Otto, an island native who is actually in the employ of Johannes (i.e. not a slave). The author masterfully provides depth to all of these characters as the reader develops an affection for them.

There is continual tension between family members about the sale of sugar—now in the warehouse but on the brink of spoiling. In various situations, Nella takes the helm as “head of household” and steers the fortunes of the family forward through her decisions. She matures quickly in spite of her age and new position in the family, pouring oil on the troubled fires of everyday life.

Nella never meets this elusive miniature artist but does see her from afar in various parts of town. An encounter with this artist’s father tends to be disappointing as far as explaining the miniaturist’s ability to “see” into the family’s future.

The author is consistent in conveying a sense of place, whether in the heady atmosphere of worship sessions (repent!) or the dank and chill environment of the Amsterdam prisons. There is a most touching scene toward the end of the story in which Johannes allows himself to express tender feelings toward Nella as they sit with hands joined.

As to pacing and plot, to say that this is a page-turner in way thrillers are is a misnomer. Rathe it’s the kind of book that keeps one awake and lost in its contents of “love and obsession, betrayal and retribution, appearance and truth.”

The reader will very likely finish the book satisfied with the author’s masterful touch on both closure and new beginnings. The Miniaturist is a novel that could easily be read again and again, with awe and surprise stemming not just from the story, but from the author’s brilliant writing and her ability to convey realities of the human condition.