The Miniature Wife: and Other Stories 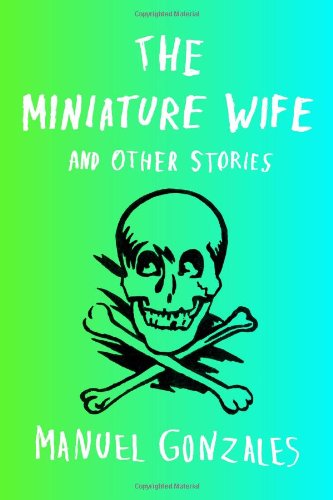 This collection of 18 short stories displays a fertile imagination and a penchant for strange situations and unlikely heroes. The Miniature Wife and Other Stories is the work of a writer willing to take risks.

Mr. Gonzales experiments with registers and styles, most of which fall into one of two types. The first is a mock-scholarly account of an esoteric subject for its dramatic or humorous interest.

“William Corbin: A Meritorious Life” tells of a 16-century Englishman who was fascinated by the street show performances of “the Klouns,” a mysterious tribe who spoke the now-lost language of Klounkouvan and hailed from what is now modern day Moldova. Corbin became their disciple and the father of modern-day clowns.

In “Henry Richard Niles: A Meritorious Life,” a Cleveland-born boy cannot learn English but expresses himself in the dead language of Ostrogothic and emerges as a poet, in an allegory about the nature of literature as a language within language. Another story, “Juan Manuel Gonzales: A Meritorious Life,” is an O. Henry-ish narration of a 19th century Mexican with a name that echoes the author’s.

In all, there are five such mini-biographies, each artfully written in a language of cool detachment from its subject. It’s easy to imagine these stories, along with a few others of a similar style (“The Artist’s Voice” and “The Disappearance of the Sebali Tribe”), standing confidently on their own in a much smaller and more aesthetically unified book, and never mind the marketing pressures.

The Miniature Wife, however, is a larger book that features popular genres, too. The author returns repeatedly to the effect created by filtering generic conventions through the deadpan reporting of a first-person narrator. There are two zombie stories, a werewolf tale and, in “Life on Capra II,” a concoction of swamp monsters, robots and a besieged narrator who seems not to be playing but living in an ultra-violent video game.

In these stories, brains splatter and ooze. Eyes get sucked from their sockets. There are uncontrollable fantasies to eat your acquaintance’s face.

At the same time, these genre pieces do more than merely reproduce conventions or offer spoofs. They assert a highly stylized, Tim Burton-ish surface, and whether or not this is interesting probably depends on whether one likes Tim Burton.

The author also tries to tease out some social or moral implications from this fantasy or nightmare fabric, which is itself an expression of human needs. This approach would’ve been more successful had Mr. Gonzales given more room to the problem of pain, which is neither a matter of style nor an abstraction. These genres have plenty of pain to offer but here, despite the gore, a sense of personal hurt is not very palpable.

But it would be misleading to suggest that all of these stories fit neatly into the aforementioned categories, because this collection is too eclectic to be pigeonholed. There are exceptions, and these include some of the most appealing stories in the book.

These stories are less mannered than the mock-scholarly accounts, and more original than the nods to popular genre. The title story, “The Miniature Wife” in which a man tries to cohabit with his pixie-sized spouse, invites comparisons to Charles Bukowski’s famous battle of the sexes, “Six Inches.” “Pilot, Copilot, Writer” and “Cash to a Killing” are pleasantly idiosyncratic, where strange or accidental events feel all the more true for being strange or accidental.

My favorite, “One Horn & Wild-Eyed” (an agreeably daft tale about a unicorn), shows Mr. Gonzales’ imagination at its best. The narrator is both brash and vulnerable, and the conclusion bizarre and satisfying.

The overall effect of The Miniature Wife and Other Stories is uneven, but the better stories are intriguing. It is clearly the work of a promising writer.