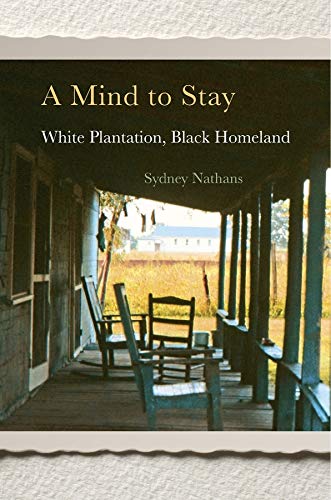 “A Mind to Stay is a revealing history of much of the otherwise lost reality of thousands of plantations that lack documentation.”

An important book could be compiled on the history of African communities in the United States, beginning with the mixed race "maroon" communities that escaped slaves shared with the Indians and property less whites in southern swamps and forests. The story would go on to the first Black Renaissance of the 1890s and beyond.

The community that survives from the Cameron Plantation in Hale County, Alabama has an epic history. It is covered in detail for the years before 1875 in the Cameron Family Papers in the Southern Historical Collection, University of North Carolina at Chapel Hill. Its documentation is reminiscent of Edward Ball's classic work Slaves in the Family.

A rich oral history covers the later years. Through change, failure, floods, and success some families held onto their family holdings, demonstrating, as author Sydney Nathans writes, "the meaning of land and land owning to successive generations of rural African Americans."

As the author writes, for some of these families to the present, "it was heir land—land for all the heirs, to be held in common for all for, to be divided among none." They survived in a world where some of their number remain cynical of real positive change, even in the age of Obama.

Nathans opens his story in 1965 when Selma and Bloody Sunday had just happened. That year two of America's most important works also came out, Alex Haley's Roots and Herbert Gutman's The Black Family in Slavery and Freedom. The latter work portrayed the traditional African American family as stable, nuclear, and survivors, even in slavery.

A Mind to Stay likewise contradicts popular myth. Its story begins with the Stagville Plantation whose plantation house near Durham, North Carolina, was built in 1787 and still has its slave cabins. It was the home of the Benneham and Cameron families.

These planters joined in the opening of the Alabama and Mississippi lands to cotton and slavery. When Paul Cameron resettled 114 Stagville slaves on 1,600 acres near Greensboro, Alabama in 1844, he continued the Benneham tradition of keeping slave families together.

These slaves were incentivized for extra work with credits at what amounted to a company store. Basic capitalism thus triumphed over bondage as it had, in various forms, throughout the slave states, a story yet untold.

With the end of the Civil War, many of the former slaves continued as they had before but as sharecroppers. The end of slavery provided Paul Cameron with the freedom he long sought to escape from being a planter as his father had done. He sold the Cameron Plantation largely to the remaining families who worked there in 1875.

A Mind to Stay is a revealing history of much of the otherwise lost reality of thousands of plantations that lack documentation. It is also a legacy of great stories. How the families of Cameron Plantation learned of freedom in 1865, for example, is one and how they tried to register to vote in 1965 is another.

In a tale particularly filled with irony, Ned Forrest Hargress of Cameron Plantation is said to have been conceived by slave trader and Confederate General Nathan Bedford Forrest in the last days of the Civil War. He became "the spiritual leader of this black community."

Nathans adds to the story his own experiences in researching it, including his discovery of the descendants of the Hargress family, the only surname on the plantation's original slave list. He tells the heritage of these people, of whom he is not related, by keeping them always so human to the reader.