A Mind Like Mine: 21 Famous People and Their Mental Health 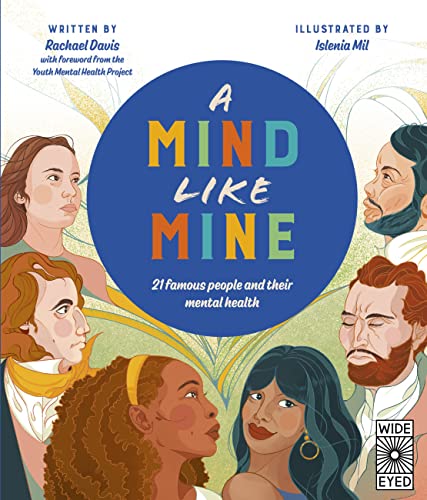 A Mind Like Mine looks at more than a dozen famous people who are no longer on Earth and nine who are still living. A reader might be skeptical that famous people can be diagnosed, post life, with mental health disorders. It’s true that the author might be wrong about some of the diagnoses, from Michelangelo having depression, OCD, and maybe autism in the 1500s, to Sir Isaac Newton having psychosis, and Charles Darwin having agoraphobia. Florence Nightingale had PTSD, and she and Van Gogh were bipolar, at least people think so, based on their history.  No one can be sure. It’s speculation, but it’s interesting to think about how these people overcame their mental health issues and accomplished great things.

After one, two, three or four famous person’s stories and diagnoses, the next double-page spread discusses the mental illness that the people might have had. Did Nikola Tesla have OCD? Did Buzz Aldrin have depression?

Some of the one-page bios show what the famous person may have had. Others are more obscure. Marie Curie’s story is an interesting one, but there isn’t a diagnosis for her, and the following two pages discuss schizophrenia, which isn’t mentioned at all in her bio. Serena Williams had post-partum depression. Michele Obama fights for mental health and had low-grade depression during the COVID lockdown of 2020 (who didn’t?). She helps people with their mental health, but her story seems out of place in this book. Maybe she could’ve been placed at the end of the book as an advocate instead of a sufferer of a mental health condition.

Some of the people are famous in Great Britain, where the publisher is located, and they may not be familiar to Americans. Jameela Jamil had an eating disorder. Deepika Padukone, a Bollywood film star, had depression. The Canadian, Lesley Chiang, had suicidal thoughts.

The first page is called Dear Reader. The author tells the reader that “it wasn’t just me going through this, and that having a mental health condition did not stop me from fulfilling my dreams.” “People living with mental health disorders have excelled in their passions and shown that anything is possible . . .”

The second page is a foreword by Randi Silverman, Founder of the Mental Health Project.

The book is oversized with colorful pages and portraits of each famous person. The Michelle Obama portrait is unflattering. The black words on red background were hard to read, as were the black words on green background—not enough contrast.

This is an important book because for centuries people with mental health conditions have been locked up, made fun of, and stigmatized by their conditions. It’s refreshing to see a book talking about famous people who managed to achieve greatness in spite of their mental health issues.

We all have mental health, and we should be able to treat it the same way we treat our physical health, without shame or stigma. This book is a great start and is for children in the upper elementary grades and older.