Mincemeat: The Education of an Italian Chef 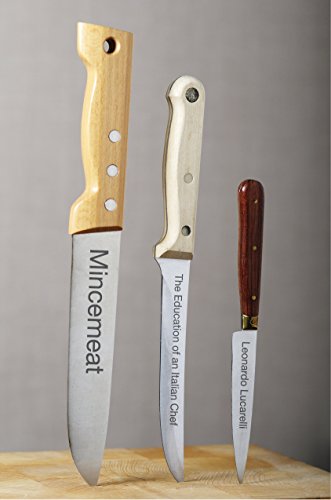 Oh, to be Anthony Bordain! Many chefs hope to emulate the swash-buckling, glove-traveling lovable rogue who makes his bones by bearing the truth of the chef-making-and-breaking industry with Kitchen Confidential.

And now comes Leonardo Lucarelli attempting to ascend these heights. But hard as he might try to entertain us with stories of his coke-sniffing, fornicating, and suffering-in-the-kitchen nights, Lucarelli is no Anthony Bordain.

Part of the problem is that Bordain was the first to stake his claim to the chef-as-rogue title. All those who follow suffer by comparison because Anthony is so Bordain. He’s created a field unto himself.

But Lucarelli’s revelations don’t resonate simply because his stories are exactly the ones you expect. This is well-trod ground. In nonfiction, a much better book is Gabrielle Hamilton’s Blood, Bones and Butter. In fiction, you might want to pick up Stephanie Danler’s Sweetbitter, which has made some “best books of” lists this year.

It’s not that Lucarelli fails as writer. He can hold his own as he shows in this scene after a particularly hectic night.

“I was soaked to the skin. My uniform was spattered with sauce and starch from the pasta water. My side towel was nowhere to be seen, my hands were red and sweaty, and in the kitchen, it looked like a huge arancini kamikaze had blown itself up. And we were the victims.”

Nice. And sometimes, he finds himself in the land of the poetic.

“You continue to work in a kitchen because chefs are the fifth quarter of Roman cuisine, an oxymoron, the offal that most people regard as waste, but is the only part of the animal that distinguishes a real chef from a wannabe, and someone who knows how to live from someone who doesn’t.”

The problem is that one grows weary of reading how he prepares a dinner, how he shops, who he screws and gets high with. And while we might suspect it, do we really want to know that he and his kitchen comrades spit viciously into the dish of someone they detest?