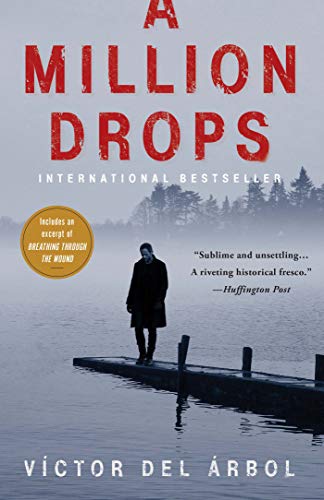 Gonzalo Gil is a middle-aged attorney with a failing career, a fractured marriage, and a domineering father-in-law who wants him to give up his practice and work for his own powerful firm, which is involved in a massive land development project that includes Gonzalo’s own family’s property.

When he learns that his sister Laura, a police detective, apparently committed suicide after murdering a man suspected of killing her son, Gonzalo becomes obsessed with retracing his sister’s last investigation. He finds himself plunged into the murky, violent depths of his family’s past and their connections to Soviet Communism and the antifascist movement in Spain. Gonzalo’s safety becomes compromised, his family turns away from him, and the forces of the past loom up out of the darkness to threaten his very survival.

A Million Drops was originally published in 2014 in Barcelona, Spain as Un millón de gotas. Víctor del Árbo is an accomplished novelist who has won the Nadal Prize, the Tiflos Prize, and the Prix du Polar Européen for his previous work.

The story follows two time tracks, one set in 2002 as Gonzalo’s life changes with the death of his sister and his subsequent pursuit of the truth, and the other track set in the 1930s and 1940s, tracing the past history of Gonzalo’s long-vanished father, Elías Gil.

As a young, enthusiastic Communist, Elías traveled to the Soviet Union to participate in an engineering project only to be arrested and shipped to the Siberian gulag, where he was maimed, beaten, and degraded. The story of his defiant survival and his return to Spain during the bloody Civil War sets the framework for his son Gonzalo’s confrontation of the violent remnants that threaten his own life.

A Million Drops is best approached as a literary crime novel. The themes it explores, including the depths of human depravity, the corruption of power, and the true nature of evil, all receive thorough consideration. Del Árbo takes his time developing his characters, adding insight one drop at a time, as it were.

It is a novel, therefore, that must be read slowly. Although it’s well plotted and well told, alternating effectively between present and past, the story moves at its own pace and cannot be hurried. To turn the pages quickly would be to miss out on the texture of del Árbo’s work, the many threads underlying Gonzalo’s quest that are woven into the story, and del Árbo’s powerful exploration of the true nature of the human condition.

A Million Drops, in the final analysis, is not an entertainment but a serious-minded work of literature using crime fiction as a point of departure for a thorough consideration of its themes. This novel is highly recommended, but with two caveats: be prepared to invest an appropriate amount of time to read it; and be equally prepared to spend that time exploring a world view that is dark, somber, violent, and unrelenting.