Millet and Modern Art: From Van Gogh to Dalí 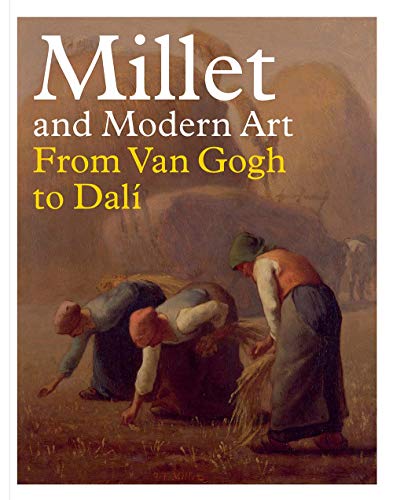 “For Millet and Modern Art, the essays are its heart and soul, down to earth and of course, modern.”

Digging deeper than his peasant farmers and their tools might allow, Millet and Modern Art uncovers intriguing, thought provoking considerations for someone who has become, over the centuries, a richly versatile and impactful artist. Jean-François Millet (1814–1875) may have painted nature from the earthy, rural world he saw around him, but he was still considered modern and avant-garde, influential to a host of world famous painters.

The first curious wonder is why the subtitle targets Van Gogh as the starting point to Millet’s modern connection. The excellently written introduction even states that there is a “wide international diversity of avant-garde artists who were influenced by Millet in the late nineteenth and early twentieth centuries.”

Various essays talk about equally renowned admirers of Millet including Monet, Degas, Renoir, Sisley, Morisot, Pissarro, Cézanne, Seurat, Gauguin, or Bernard, from among the powerhouses of the time—all of whom were indebted to Millet’s approaches and were each on the scene prior to or simultaneously with Van Gogh (1853–1890). “Millet was a great synthesist—extending into the work of Monet, Seurat, and Van Gogh.” So the question is: Why give the title to Van Gogh?

As the case builds up, essay by essay, example by example, image by image, there is an interesting dynamic playing out. The reader is drawn in, waiting patiently and expectantly to be let in on the editors’ big reveal. The other artists picked out certain aspects of Millet’s work that appealed to them and sparked them to experiment further in one area or another. In contrast Van Gogh, as the thesis is presented, who saw Millet as a total and complete role model and mentor as much in art as in life, morality, and spirituality, bordering on obsessive infatuation, as Van Gogh’s personality was prone to do through most of his life.

Equally satisfying is to think about not only what Millet did for Van Gogh, but what Van Gogh did for Millet. As Millet’s oeuvre was posthumously underrated and undervalued, at risk of being under-represented or even buried into obscurity, it was Van Gogh’s commitment to everything Millet that, subsequent to Van Gogh’s notoriety, lifted Millet back up into the forefront of art history. As Van Gogh reached his claim to fame, so Millet was re-launched into a higher status as well, securing his position in the overall canon.

Having Dalí (1904–1989) bookend the other side of Millet’s chronology is almost as curious a point as Van Gogh. The essays spend quite a bit of time and page space explaining Van Gogh’s relationship with Millet, eventually justifying the choice. They also emphasize the wide range of Millet’s appeal across the century in Europe, Russia, and the United States. Winslow Homer, John Singer Sargent, George Inness, Giovanni Segantini, and Walter Sickert were on the Millet bandwagon as were Edvard Munch and handfuls of other expressionist, abstractionists, suprematists and modernists.

Very little consideration is actually given to Dalí, and he sticks out no more than any of the other artists mentioned. If it weren’t for the fact that Millet’s Angelus happened to have hung in the classroom at Dalí’s Catholic school, where he undoubtedly suffered some form of abuse, he would potentially have had no need for Millet. The psycho-sexual book that the shock-value oriented Dalí soberingly attributes to Angelus is fanatical and deserved no more than the mere blip of a credit it received. Was obsession perhaps the criteria by which these two—Van Gogh and Dalí—were selected? Yet Millet’s points of exposure do not even conclude here with Dalí. Indeed, the final essay seems to drop off suddenly with the focus not on Dalí at all, but instead on Picasso.

For an exhibition catalog, Millet and Modern Art: From Van Gogh to Dalí is a bit unorthodox. As a catalog of exhibition artwork, it is difficult to follow. It is unclear how closely the material corresponds with the exhibition. The images are not presented in their own section, instead they are interspersed within the essays. An appendix indicates which selections are to be included/omitted from whichever venue would be hosting the exhibit. These differences appear significant.

To its credit, Millet and Modern Art  is not just an exhibition catalog. Its primary focus is designed around the information, research, and inspiration of some original thoughts on the selected art history themes. In this aspect, it is well organized and clearly presented. For Millet and Modern Art, the essays are its heart and soul, down to earth and of course, modern.