Millennium: The Girl Who Danced with Death 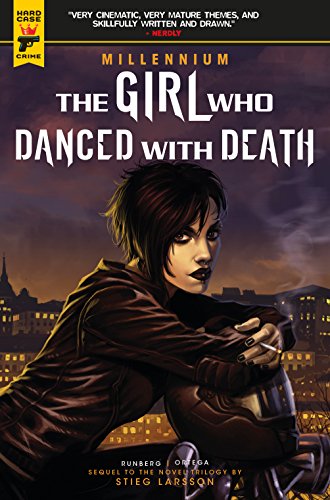 One might think that by now Saint Salander had driven all of the fascists, sexual predators, and other snakes out of Sweden. After all, Sweden is not a very large country. But, alas, no. The Girl Who Danced with Death graphically demonstrates that the home of the Nobel Peace Prize is still packed with bad guys and one or two bad gals. Only Salander, Lisbeth Salander, guns blazing and motorcycle tires screeching can successfully launch attacks on them.

The story begins almost innocently enough. Wasp and her friend Trinity are walking to a rock concert. Along the way, Trinity decides to stop and make a drug buy to enhance the concert experience. This gives the masked forces of evil enough time to violently kidnap Trinity. Wasp incorrectly attributes the grab to the Swedish Secret Service, SAPO. With all the villains that abound in the story this is an easy mistake for her to make.

The real thugs, at least the first group to appear, is a nasty collective with the unlikely name of Sparta. They comically mimic the ancient Greek city-state in dress and military discipline. Their members mostly strut about shirtless, wearing crude knock offs of Spartan battle helmets. Adding to their unusual look, across their hairless chests they have the word “Freedom” tattooed in large block letters. If they were to wear shirts, they would probably have been brown. They are the secret army of the alt-right wing Swedish Republican Party. Its intent is to reclaim the country from the clutches of immigrants and return it to properly white Swedes. Putin and Trump are mentioned several times in the storyline to help the reader connect the dots.

The dots are many in the story. The mastermind behind the Sparta drapes is mega-rich madman Dunker. He is a school classmate of uber-hacker and long-time Wasp colleague Plague. Plague was previously kidnapped by Sparta. He and Trinity are being forced to break into a super-secret spy program of SAPO, another group with bad intentions. (Wasp also has her fingers flying on keyboards to hack that program for her own reasons.)

Rounding out the low life characters is another school chum of Dunker and Plague, named Burrow. His mission in life is to defeat feminist leftists by holding seminars to inspire Swedish men to follow, shall we say, poor dating conduct. Burrow is also an acolyte of the Swedish Republican Party. The plot, with its large number of principle characters, is actually much more complex and wearing on the concept of reality than summarized here.

The graphic artwork is good. It well captures the many scowls and images of rage that grace the faces of the actors. Deaths of the evil as well as the innocent are frozen in the amber of anguish. The many gun battles roar and spout flame. Scenes are linear and concise. The artwork, in the manner of painter George Seurat, takes the pixels of the story and makes a composite of them that is understandable.

This original story was inspired by the novels of Steig Larrson. Its title suggest that having obtained her signature tattoo, played with fire and kicked a hornet’s nest about, all that can remain for Salander is a farewell dance with death. When the music stops in this story, some characters emphatically disperse to new lives, while others plan for a class reunion in hell. A last dance it might indeed appear. But that would end a popular franchise. Most likely, the reader’s subscription to Millennium magazine is not cancelled. At the end, the local Republican Party, SAPO, Putin, and Trump remain unvanquished. They must be confronted again. What say you, Wasp?