Mill Town: Reckoning with What Remains 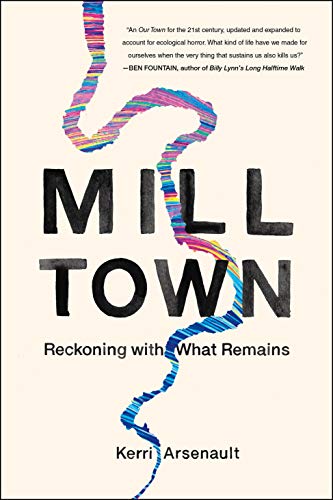 “Kerri Arsenault’s portrayal of the devastating impact of unregulated capitalism on the lives of poor, mainly dark-skinned people is a serious indictment of the American way.”

The story of the polluted mill town that America forgot has been told before. So why should we care about Mexico, Maine, an isolated place smelling of rotten eggs, where “everyone knew everyone,” “night fell like a bruise,” and a suspicious number of people died “after a battle with cancer”?

This was the home that Kerri Arsenault, an editor at Orion magazine, left for Beloit College in 1985. Three generations of her working-class family and friends lived there, many earning “smokestack money” at the paper mill, whose chlorine paper-bleaching process produced the dioxin, a toxic chemical used in Agent Orange, that flowed into the local Androscoggin River.

Determined to understand her family tree and the dynamics of a rural area where people quietly ignored the devastation wrought by the corporation on which they depended, Arsenault has performed an in-depth autopsy on Mexico, Maine. Her book, a combination of memoir and reportage, is filled with pain, outrage, and a heartfelt attempt at understanding the way some people live amid “silence and coverups.”

Anyone who has ever tried to understand their hometown will be drawn to this wrenching debut.

The author began her intense 10-year investigation in 2009. Married, moving around the country with her husband’s changing work assignments, she kept revisiting Maine, interviewing relatives and friends, reading journals kept by her millworker father, doing library research, and even taking a tour of the paper-making facility.

She traces the history of her French Canadian ancestors, who along with Italians, Poles, and other immigrants, flocked to the opportunities offered by the mill established a century ago by Hugh J. Chisolm, who sought to move beyond the tenement housing of mill towns like Lowell, Massachusetts, and built low-rental housing that “working men of moderate means” could be “justly proud of.”

As it happened, the French Canadian mill workers were immediately deemed “Herring Chookers” by the mill’s management. An 1881 state labor report called them “the Chinese of the Eastern States,” noting that they were “indefatigable workers, and docile.”

Silence and fatalism were characteristic of her ancestors, Arsenault finds. Relying on the mill, they resigned themselves to life in a place dubbed “Cancer Alley.” “It was often difficult to tell where the mill ended and where our personal lives began,” she writes. Workers practiced silence on the job. In that, she finds, they were not so different from workers elsewhere who refuse to complain about wrongs at work. One international study concluded “some 85 percent of workers prefer to remain silent rather than speak out.”

Arsenault’s mill workers certainly overlooked a lot. Her grandfather William—like many others—died shortly after retiring from a job in the room where paper pulp was bleached white. Many laborers obeyed the admonishment of mill supervisors (“Don’t say anything”) when waste was dumped into the town reservoir.

Do all of our lives revolve “around the silences we’re afraid to violate?” the author wonders.

Kerri Arsenault’s portrayal of the devastating impact of unregulated capitalism on the lives of poor, mainly dark-skinned people is a serious indictment of the American way. The book ranges widely—too widely—covering everything from EPA studies to the minutiae of the author’s married life to the often wearisome complexities of several generations of ancestors. Despite her rambling narrative, the author’s appealing writing—graceful, discerning, and compassionate—will keep many readers turning the pages.

A decidedly downbeat story for this difficult moment, then, but undoubtedly a revealing exploration of America’s overlooked and forgotten.