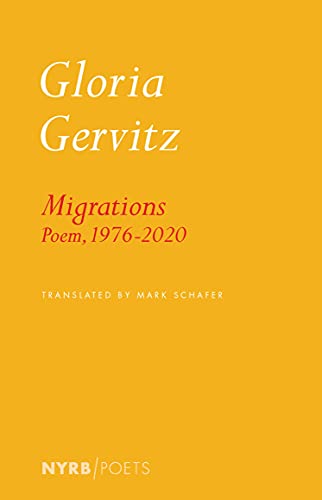 “For Gervitz, Migrations is both a life’s work and a memory palace, a narrative pilgrimage through the lens of her own experience that is both alive and dead, both past and future.”

When discussing poetry or art, perhaps it doesn’t make sense to focus on whether work is good or bad; taste is subjective. Some like Manet, some like Monet. It might be better, instead, to discuss whether the work is successful.

Gloria Gervitz’ Migrations, presented a second time and greatly amended from a previous 2004 release, is offered as an epic poem with, once again, a caressing translation by Mark Schafer. It is, perhaps, being released in a more receptive time, and to a more receptive audience: identity has become the star around which all contemporary poetry is obliged to revolve, and Gervitz here provides alluring bait: a narrative that crosses continents, genders, religions, and centuries.

One might politely question whether the 263-page book is an epic poem;  the more direct will point out that it clearly isn’t. Here, several hundred poems, presented without breaks, interruptions , or intermissions tell the story of the latest half-century of a life, but also many that came before and perhaps a few to follow, in a stunning display of prolixity that for some, to be sure, might prove a slog.

However, that is entirely a matter of taste, and not of success. For Gervitz, Migrations is both a life’s work and a memory palace, a narrative pilgrimage through the lens of her own experience that is both alive and dead, both past and future.

Here, there are no mysteries in our histories; there are many, many Kaddishes in migrations, and many, many deeply private explorations of self. The Kaddish here is far more the plaint of Allen Ginsburg than Amrom Gaon but so, too, is the ear and hand of the author.

“I wash my vulva clitoris hard and full / and my pleasure grows so intense / that i even pee on myself, she offers at one point. i push down my underpants/ pull the starched sheet over me/ and touch my young vulva/ slip my fingers in/ explore/ find the pleasure spot/ and linger there/ my fingers ever more nimble/ more precise/ i close my eyes and say filthy girl/saying it excites me/ and the feeling spreads/ takes me completely/ covers me completely/ and I am this body/ this rapture this vastness,” she writes at another. Surely for someone this is appealing, someone who is shocked or titillated by raw human sexuality, or who is for the first time introduced to erotic metaphor. But pressed hard against several millennia of Aramaic prayers and Yiddish exclamations, it feels at best like the sort of thing mocked on television, the eclectic and self-revering beat poet in a basement announcing random things to a crowd, or at worst like they’ve hired rabbis to write Letters to Penthouse.

“who is praying? is it me? / who is answering? / where do these words come from? / and who will say Kaddish for me?” Gervitz, at one point, asks into the ether, though we all know the answer: herself.

Still, there is much to praise here, intellectually, in particular the way Gervitz crosses cultures and generations, and the way that the work, spanning decades, changes tones, shapes. Ancestors live large here, and they, like the poems, change, just as faces change from one decade to the next, from one generation to the next.

In the end, the question reverts back to whether the book is successful, and the only truth is this: here, with the thanks of time and talent, Gervitz’ words have been placed into a serious translation, produced in a serious manner by a serious publisher. This is 46 years of someone’s life and someone’s work, and putting together such a book is a tremendous task. Is it successful?  Well, this is a book put together by Gloria Gervitz, to express Gloria Gervitz, and to satisfy the artistic needs of Gloria Gervitz. In this it has fully, and unquestionably, succeeded.