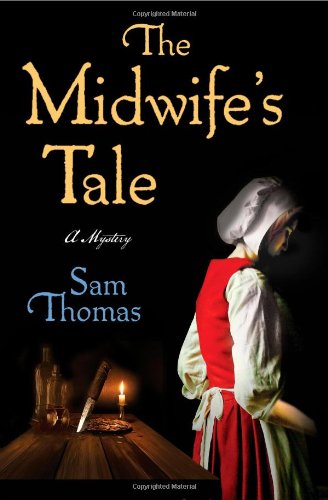 “We can only hope to meet the unlikely team of Bridget and Martha in Sam Thomas’s future work.”

The year is 1644. York is under siege as King Charles’ loyalists battle rebels in Parliament. It is the worst of times, yet life goes on.

Author and Historian Sam Thomas offers us an intriguing mystery in addition to a lesson in the history of 17th century England. It is his first attempt at fiction combining detailed historical facts and deftly interweaving a mysterious plot involving murder, politics, and a glimpse at England’s dark side as murder begets murder and closely held secrets begin to surface.

The story revolves around the murder of Steven Cooper, a prominent member of the community. Esther Cooper, the victim’s wife, is convicted of the crime after a swift and perfunctory trial. Bridget Hodgson, a gentlewoman and midwife, is a dear friend of the accused and is convinced of her friend’s innocence.

Bridget sets out to put things right and expose the true killer.

An unexpected assistant shows up at Bridget’s door in the person of Martha Hawkins, a young lady with a checkered past, but one who proves a valuable associate as she knows how to live by her wits.

We find her fending off assailants and easily picking door locks and safe chests where necessary. Martha becomes a kind of “Dr. Watson” to Bridget’s “Sherlock Holmes.” But when Martha’s past begins to catch up with her, Bridget risks paying a steep price for taking her on.

Most interesting is the author’s portrayal of midwives of the time. Bridget Hodgson, gentlewoman and midwife, is a woman of considerable sway. But her influence goes way beyond assisting a woman during childbirth. She follows up, checks on the welfare of the child, provides food and clothing, and sadly assists at the all too frequent death of either mother or child.

“All midwives lost infants in childbirth or soon after—it was God’s will and a midwife’s lot—and a good midwife felt every death in her bones.”

Ms. Hodgson, though barely 30 years of age, is twice widowed and has lost two of her own children, causing old wounds to reopen with each death she encounters.

A midwife is also critical to fairness and justice. It was she who extracts the name of the father before assisting at the birth of a bastard child, thereby conserving church funds for the poor and requiring support from the father.

She is also called upon to diagnose pregnancy in order to postpone executions or to examine infanticide suspects when dead infants are discovered. The plight of women is exposed, especially those who find themselves with child and without a husband, often as a result of rape by their employers.

The Midwife’s Tale literally beckons the reader back again and again as we hope to get closer to solving the mystery of who has murdered a prominent and righteous member of the community. Yet it is the vivid portrayal of a critical period of civil war in England’s history as seen through the eyes of everyday people that engages the most. A look at the customs of the times makes the evolution of women’s rights more understandable. It is important to note that male apprentices often suffered injustices equally as they endured their period of what sometimes amounted to slavery.

The tension will keep you turning pages. With each discovery, the unlikely duo of gentlewoman and “street smart” assistant find themselves taking on more enemies in the halls of Parliament and in the bowels of York’s most downtrodden neighborhoods. At times, they even doubt Esther’s innocence. The Midwife’s Tale is a history/mystery that is wonderful to fall into and not escape till the end.

We can only hope to meet the unlikely team of Bridget and Martha in Sam Thomas’s future work.