Midnight in Cairo: The Divas of Egypt's Roaring '20s 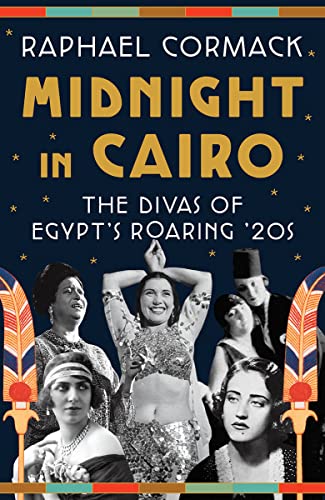 “This is a rich history, much broader than the title hints at. It’s more about women as movers and shakers in a country’s culture than about divas.”

Raphael Cormack provides a rich history of Eyptian women in the early part of the 20th century by describing how girls, often from poor rural backgrounds, became important stars in the entertainment world. Beirut has long been called the “Paris of the Middle East” but from what Cormack says, Cairo rightly deserves that claim.

By following the lives of the most influential and beloved singers and actresses, Cormack vividly recreates a world where women had some power and autonomy, running their own theatre troupes, publishing their own magazines. More importantly, he gives a wider context for Egyptian feminism. These women “had lot to fight against, from the disapproval of conservative society to men who thought they could do what they wanted with an actress or nightclub singer . . . These women who did so much to create modern Egyptian culture were not part of the elite . . . This is the story of a parallel women’s movement, one that happened in the demi-monde, late at night after the high-class critics had gone to bed.”

Besides following the thread of a growing feminist movement, the book traces Eygpt’s political upheavals, from British rule to independence, all through the lives of seven women, each one illuminating different aspects of the cultural and political life of the country. It’s an effective tactic. By presenting each woman’s experience in rich detail, a tapestry emerges, creating a complicated picture of a city and culture at a time that now seems mostly forgotten. Anyone who has been to Cairo in the last decade won’t recognize the city Cormack evokes. It’s hard to imagine that such vocal and provocative women could command loyal audiences today.

One actress, Rose al-Youssef, started a magazine that continues to this day. It began with features about the entertainment industry, in-depth stories instead of the usual gossip, but grew into one of the “most important cultural-political journals in interwar Cairo.”

Fatima Rushdi, another actress who ran her own acting troupe, was so beloved, she was dubbed the “Sarah Bernhardt of the East.” Besides enjoying a successful acting career, Rushdi pushed against expectations of what women “could” or “should” do. When one interviewer accused her of lacking “feminine delicacy or gentleness,” she retorted, “I don’t have time for stupid things like this. I do absolutely everything a woman should do . . . My mind is constantly working, my body is heavy and worn out. My ambitions are greater than my mind and stronger than my body. I don’t have time to do all I need and at the same time flaunt my femininity . . .  What do they even mean by femininity?”

Oum Kalthoum was not only one of Egypt’s richest actors, a film favorite, she firmly controlled her professional and political life, not marrying until her career was well-established. Unlike other women in the entertainment world who usually married men far older, those who could finance or otherwise support their acting, Kalthoum wed a man ten years younger, someone who relied on her for support instead of the other way around. In 1942, she helped establish the Egyptian Musician’s Union. More than that, she won the first election for its presidency. “Over the next decade, she won seven consecutive elections for the presidency and oversaw several initiatives to improve life for members, including a campaign for fair wages and a fund to support unemployed, sick, and struggling musicians.”

The second part of the book veers more into the political as Egyptians fought to loosen the British grip on their country. But the tenor of the book remains the same, shining light into little known aspects of Egyptian history through the inspiring lives of women who were part of the Partisans for Peace. Cormack reminds us that these women were Christian, Jewish, and Muslim, fighting together for women’s rights and Egyptian freedom. This is a rich history, much broader than the title hints at. It’s more about women as movers and shakers in a country’s culture than about divas. We recognize the power Hollywood has on the American psyche. The women profiled here had a similar effect on the Egyptian one.