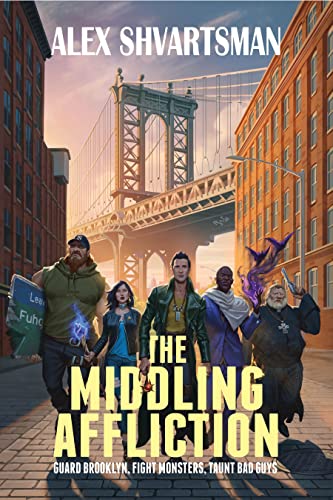 “Few books strike that balance so well, delivering laughter and smiles inside a story that feels like it matters. . . . Readers looking for an entertaining read that will stick with them afterward will not be disappointed.”

The Middling Affliction is a delightful romp through a New York City alive with Sumatran changelings, Philippine energy beetles, and all manner of bizarre and dangerous magical creatures. Conrad Brent is a member of The Watch, an organization of magicians who keep the city’s unsuspecting citizens safe. “Vampires treating the New York City subway system as their own personal cafeteria? Werewolves in Central Park? Wizards using mind control to entice baseball fans to root for the Mets? We come down on them like a ton of bricks.”

Conrad has just one problem: He is not actually a magician. He is what is known as a “middling,” a person who can see the magical world around him but has no magical talent. Instead, he uses a combination of charisma, sleight-of-hand, and secreted magical artifacts to keep from blowing his cover.

This premise alone, reminiscent of Jim Butcher’s Dresden Files, would be enough to power an enjoyable novel, but Shvartsman takes it ten steps further. Despite being the first in a series, the book is packed with revelation after revelation, uncovering secret conspiracies, gods, dragons, and dangerous magical technologies. Forced to leave New York, Conrad portals across the world, where he finds out what it really means to be a middling and faces greater dangers and difficult choices. When he finally returns, he finds out which of his former friends are still willing to stand with him against a threat that could unravel their whole way of life.

The Middling Affliction brilliantly walks the line between humor and serious themes. Conrad faces true dangers, to himself and those he loves. He encounters prejudice and betrayals and hard moral choices. He comes to the edge of himself and must choose between what he’s always wanted and sacrificing himself for another’s good. Despite this, the book remains lighthearted throughout and sometimes laugh-out-loud funny. Conrad’s inner voice is sarcastic and engaging even while facing the prospect of violent death, and the quick banter and over-the-top magical monsters keep the tone light.

Few books strike that balance so well, delivering laughter and smiles inside a story that feels like it matters. For this, and for its engaging characters and inventive plotline, The Middling Affliction belongs on the shelf with John Scalzi’s Old Man’s War and Naomi Novik’s A Deadly Education. Readers looking for an entertaining read that will stick with them afterward will not be disappointed.