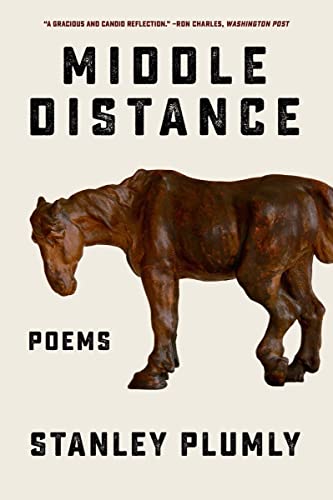 We were, all of us, at one time not alive, which makes it strange that we should wonder, so widely and so often, what it will be like to be not alive again.

Stanley Plumly is, once again, not alive, and at the risk of being indelicate will be not alive forever. A question is therefore raised: What scent of the artist is in the art? And how long does it linger in the room after they’ve stepped out of it?

Middle Distance offers, literally, Plumly’s last words to the world: written while dying, and knowing it was so, they reflect a life in contemplation, often in the abstract; it is the tone of a man playing tourist in his own body, visiting a city in which he can never remain.

It feels strange, almost voyeuristic, to read a poet’s elegy to self; in the way of all voyeurs, we all eventually will do what Plumly was so busy doing, yet still we remain infinitely curious about it. Death is the great clarifier, giving meaning to time and a destination to life. The arrival of it, for most of us, is dreaded, but in reality it provides something our hectic lives never enjoyed before: simplicity. The moment one learns of their terminal illness, all of their problems become but one.

It would be easy for anyone, poet or otherwise, to descend into melodrama, grappling panic. Plumly doesn’t. Instead, there is contemplation, reminiscence, and reality: He knows the horizon is dark, and is a little worried, but also accepting: no one is really gone—we break down, into atoms, into memories, into poems.

This is not, exactly, a poetry book; there are long distractions into verse—most notably, a serpentine tangent to recount his grandfather’s German slave laborers during the poet’s own war-era boyhood. But even the poems, themselves, are really just stories, broken down into their component atoms: Few poems here could not be stripped of their line breaks with any real change to their narrative or to their structure. This is no more true than when the poet uses his pen not to provide answers he can no better give than we, but for when he asks questions that you can tell he’s ready to know soon enough, but for which he might like a cheat sheet in advance.

“When did I know that I’d have to carry it around, the poet writes of his waiting knowledge,  in order to have it when I need it, say in a pocket, the dark itself not dark enough but needing to be added to, handful by handful if necessary, until the way my mother would sit all night in a room without the lights, smoking, until she disappeared? Where would she go, because I would go there. In the morning, nothing but a blanket and all her absence and the feeling in the air of happiness. And so much loneliness, a kind of purity of being and emptiness, no one you are or could ever be, my mother like another me in another life, gone where I will go, night now likely dark enough I can be alone as I’ve never been alone before.”

The poet is now alone. And the reader can’t help but feel, after walking down the road with him, a little remiss at the loss, in the way we feel we know celebrities we’ve never met. It’s tempting to search for clues, subtexts: where the poems were printed, who assembled this book. Even Plumly’s author photo, one has to notice, looks forlorn, like there’d been a photograph waiting behind the fern in his doctor’s office just after the delivery of some bad news.

In “With Weather,” the last poem of his last book, his very last words to existence, Plumly invites you not to join him at his grave, but at his window, to sit next to his brittle body and take in the outside world, to see it rain a little and then snow. “You could get up and join the snow,” Plumly softly tells you. “You could move to a warmer window. You could move to the middle of the room. You could get up and turn on the light.” His last words offer, like any death, no closure, no punctuation, no final note: “You could sit here alone”

The full stop, like the poet, is not needed now; it is just ink on paper, and we know that it exists, like its author, somewhere, broken down into atoms, into memories. Not gone, just reassembled.