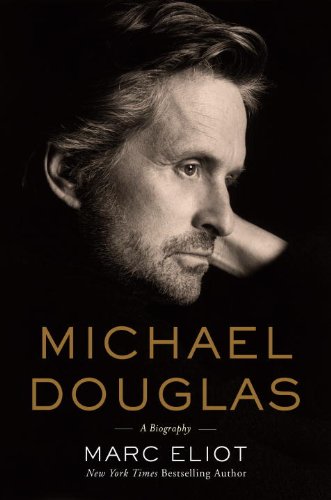 “. . . the reader comes away with no better understanding of Mr. Douglas than from reading about the actor in a fawning celebrity magazine.”

Doubtless many a celebrity hears the news that he or she is about to be the subject of a biography with a mixture of trepidation and anger. What friends might go telling tales? What heretofore unknown facts might come to light? What skeletons may be uncloseted?

What tales of marital infidelity, drug abuse, bad parenting, diva-like behavior and petty insolence will be bound between covers?

Likely, actor/producer/celebrity scion/sex addict Michael Douglas, subject of Michael Douglas: A Biography lost a few hours of sleep over such worries, given that he has, in his time, exhibited all the behaviors aforementioned.

But it is a sure bet that little did he expect that the resulting life assessment would be such treasure-trove of platitudes, great and small. Or that it could possibly be so laden with superlatives aimed at everything from his career accomplishments (“Michael had become the most successful film producer in Hollywood, perhaps of all time.”) to his “flowing blond” hair. Or that the finished project would seemingly be more the product of an obsessed stalker than of a bona fide biographer.

Indeed, the book is so lip-smackingly, googly-eyed loving toward the cleft-chinned Mr. Douglas that the reader suspects author Marc Eliot’s middle name is “Zeta.”

In truth, Michael Douglas has had a notable life—son of Hollywood icon Kirk Douglas and husband of actress Catherine Zeta Jones—and a remarkable career, winning Oscars first for producing One Flew Over the Cuckoo’s Nest and later for Best Actor in Wall Street.

But our author is apparently not satisfied by simply celebrating these facts in creating a portrait of the actor. In an act of literary schadenfreude, Mr. Eliot feels the need, in praising Mr. Douglas, to denigrate others or to choke them with faint praise. Jane Fonda, for example. After sniffing at her brother Peter’s career accomplishments versus those of his famous father and finding them lacking, our author concludes:

. . . an odd thing to conclude about a fellow second-generation actor, winner of two Oscars of her own, whose cultural impact might arguably be said to far outdistance that of Mr. Douglas.

But then this is a book rife with odd conclusions, as here, where the author very briefly deals with the subject of Douglas’ alleged sex addiction:

“Whatever the actual tipping point, on September 17, 1992, while his on-screen lover Sharon Stone continued to bask in her belated but enormous fame, a grim-looking Michael, using the alias Mike Morrell, wearing a blue shirt, jeans, and sandals, checked into the Sierra Tucson Clinic, located in the foothills of the Catalina Mountains of Arizona, for a thirty-day program to treat alcohol abuse and, as it was reported by some at the time, sexual addiction.

“According to John Parker: ‘Encouraged by his counselor, Michael [reportedly] began his program of self-discovery when he stood up, head bowed, and gave a lengthy commentary about his inner demons and the problems that had turned him into something of a Jekyll and Hyde character. He confessed to the group of eight fellow suffers: “Sex is just a wave that sweeps over me, an impulse that is overpowering. I’m helpless. Every time.” He also admitted to a problem with alcohol and drugs, although he denied that he was addicted to either. He also said his wife had “kicked him out” of the bedroom, having been repulsed by his apparently uncontrollable actions.’”

In a footnote, the author concludes:

“While admitting to the alcohol abuse, Michael always denied he was or has ever been treated for sex addiction (according to the clinic, sexual addiction occurs when a person has an uncontrollable urge to indulge in sexual practices without emotion). The Sierra Tucson Clinic does treat sexual adjustment cases. Although it also treats a variety of addictions, including drugs and alcohol. The actor Rob Lowe checked into Sierra Tucson in 1988 after being caught on video in a hotel room in bed with two women. Another famous alumnus is Ringo Starr.”

This passage confuses in that, in presenting the witness of the mysterious Mr. Parker, the author’s eyes and ears in the clinic, we are given to conclude, based on Michael Douglas’s own words, that the actor had an issue with sexual addiction as defined by Sierra Tuscon. But then the author concludes in his footnote that, based on the words of Douglas himself, the actor never underwent treatment for sex addiction.

So which is it?

Isn’t this something that having read the book, we would come away actually knowing about?

And this is to say nothing of the “That’s it?” response that the reader had upon finally getting to the section of the text that purported to explore the issue of Mr. Douglas and sex addiction. Which, let’s face it, is something that readers of a biography on Michael Douglas want to know about.

It brought to mind that old Groucho Marx punch line made famous by Woody Allen in Annie Hall: such bad food, such small portions.

Here as elsewhere in the book (most notably when Mr. Eliot deals with Michael Douglas’s troubled relationship with his son, Cameron), the author glosses over vital aspects of his subject’s life—the exploration thereof being, after all, the sole purpose of the book—in favor of the overly detailed sections that exhaustively investigate film production, accolades, cleft chins, flowing blond hair, and awards won.

This ultimately proves problematic for the author in that, in this same biography, he mistakenly suggests that Debra Winger (who as originally considered for the role in Romancing the Stone later made famous by Kathleen Turner) lost the 1984 Best Actress Oscar to Julie Andrews in Victor/Victoria, somehow ignoring the fact that Winger actually lost to her co-star Shirley MacLaine for Terms of Endearment and that Andrews, who was in reality nominated at the 1983 ceremonies, didn’t win, but lost to Meryl Streep in Sophie’s Choice.

Not an important factoid, truthfully, unless you happen to be hawking a biography of a Hollywood star that emphasizes such things as Oscar wins. Then this simple mistake seems to underscore the underlying issue of the overall veracity of the work in question.

In his list of source materials, Mr. Eliot attributes much of what he has gathered together to such publications as Playboy, Playgirl, Us magazine and Entertainment Weekly. In addition to this, his brief bibliography he lists a smattering of works, including Kirk Douglas’s memoir The Ragman’s Son (which is taken as gospel truth and forms the basis of much of the information presented on Michael Douglas’s family background and father-son relationship), producer Julia Phillips’s You’ll Never Eat Lunch in This Town Again and the New York Times’ Guide to the Best 1,000 Movies Ever Made.

Then the author, in his Acknowledgments, gives the name of two people—neither of whom would be considered especially close to Michael Douglas—as his chief sources and then states:

“Through friends such as Zack [Norman] and Dede [Allen] (who were not specifically interviewed for this biography), and dozens of others, I was able to write this biography of Michael. And because Michael is still with us and remains a powerful force in Hollywood and New York, I feel I should refrain from naming most of the others who bravely helped.”

All of which, once again, gives Michael Douglas: A Biography the air of something cobbled together and not at all the product of celebrity journalism that is should be.

Nothing is clearly attributed.

Nothing new is uncovered.

Everything, seemingly, comes to the reader from third-party sources. And worst of all, the reader comes away with no better understanding of Mr. Douglas than from reading about the actor in a fawning celebrity magazine.

In short, Mr. Eliot has given us a plodding and humorless thing, a glorified term paper, instead of a well-researched, well-reasoned biographical work—one in which something as easy to verify as an Oscar win has gone unchecked. Leaving the reader to ask two questions:

First, has Us magazine ever before been listed as a journalistic source?

And second, if this were an actual term paper, would it receive a passing grade?