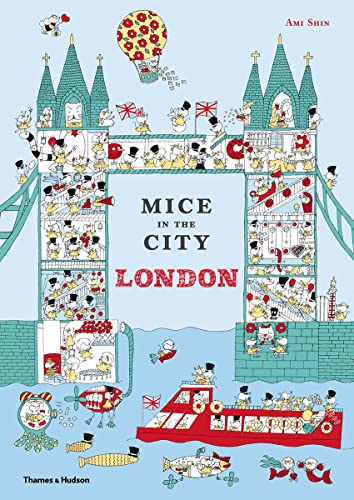 In her oversized new picture book newcomer Ami Shin, a recent and celebrated graduate of the Cambridge School of Illustration based in Korea, is taken with London architecture. Specifically, she envisions mice working and living in the various landmarks of that gorgeous city. As a way to tour the city and learn a fact or two about Big Ben, the Tower Bridge, and the Tate, this book is a handy map that includes some tasty visual games, such as finding eight hide and “squeak” elements on every page.

It is easy to imagine why an illustrator would want to draw Buckingham Palace, the Globe Theater, and the British Museum, among other structures. For appeal, Shin has added whimsy and plucks out a fact or two as a way to share her love of the place with young children. It’s a nice straightforward book that some children will surely appreciate. It’s also another nonfiction title to add to the burgeoning field of nonfiction for young readers. Perhaps it will give American kids a sort of key to the city, a way to appreciate a storied place across the Atlantic.

But should Amy Shin continue to publish books like this one, there might be further room for exploration. Graphically, there is a same-ness to every piece of art here. We are always far away, the perspective and scale are never varied, so every page feels pretty much like every other page. Any one illustration is quite appealing, but after awhile, the busyness becomes monotonous: no image is more compelling than any others.

And there is the classical challenge with rhymes. Are they satisfying because rhymes are intrinsically satisfying, or are they contrived? For example, here’s the text for Buckingham Palace: “This marvelous palace is home to Queen Mouse. Her servants all help to look after her house.” Simple, believable, accessible and not forced.

However, here’s the Walkie-talkie Building: “At the top of this office block, deep in the city, You’ll find the Sky Garden—its views are so pretty!”

The Mice In the City is an original approach that has a good reason to exist, from a promising newcomer. Children who can hunker down and examine each spread will find delights and surprises throughout and will want to revisit this urban mouse-scape. Others might find the sing song poems less than fascinating. Parents who can read this along with their children will probably get the best results.