Of Mice and Minestrone: Hap and Leonard: The Early Years 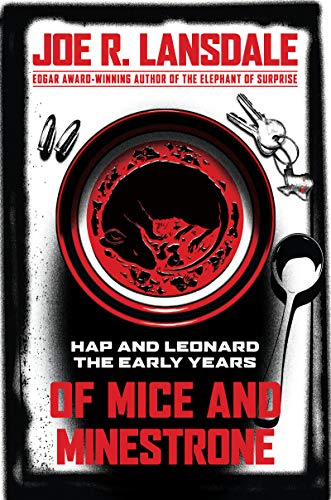 Bestselling author Joe Lansdale is back with two of his greatest and most original creations, Hap Collins and Leonard Pine. The contrast of characters couldn’t be more different for the two inseparable friends. Hap is white, easy going, and a former 1960s white radical hippie and conscientious objector against the war in Vietnam, for which he spent time in prison; Leonard is a black, gay, Vietnam veteran who is also a conservative. Despite their political differences and on-again off-again verbal skirmishes, one thing unites them later in life as East Texas private investigators: a burning penchant for defending the underdog, poor, and downtrodden, and those seeking justice when justice is almost impossible to find.

This book is the genesis for the duo’s early days, told in five short, but salient stories. Four of the stories have never been published, “The Watering Shed” being the exception. They are all told in Hap’s easy-going but telling voice.

The first of the stories, “The Kitchen,” deals primary with Hap—as do two others—his upbringing, and his reminiscences of good times with his aunts, uncles, and cousins at his Grandma’s at Christmas, Thanksgiving, and other important holidays to a young boy growing up in East Texas. Food and its aroma played a vital part for those early memories, probably because there wasn’t a lot of it to spare, except on those exceptional days. Afterward, going home, a small miracle was performed. There always seemed enough food left over to make sure all family members had some to bring home with them:

“I sat in the back with the sacks of food, listened to pans and empty platters rattle in the trunk. I could see bright stars in the clear night sky. I felt warm and sleepy.

“The moon made the road in front of us shine, as if waxed. I drifted off. I dreamed of space travel like I had seen in the comic books or in the Buck Rogers and Flash Gordon serials on TV.”

The second story in the collection and title, “Of Mice and Minestrone,” is a powerful, salient tale of corrupt cops conveniently looking the other way as a woman is battered daily by her violent thug of a husband, leaving a young Hap with a guilt shaped like a bat that will never leave him, despite assurance from his father:

“As Dad predicted, the bat flew away more often, but now and again, in an unsuspecting moment, asleep or awake, it flapped back into the little dark cave inside my head and made its presence known.”

The book is completed with “The Watering Shed,” a story of racism and murder in classic southern noir fashion; the hilarious “Sparring Partner,” and concluded with “The Sabine Was High,” a tale of sadness and joy when the two friends are forced to go their separate ways via wars and laws, finally reuniting forever, despite all the odds and obstacles placed in their ways.

And, just to spoil us even more with this feast of storytelling, Kasey Lansdale, the author’s daughter, gives us a banquet of home recipes from the boys’ own favourite menus, 17 in all.

Of Mice and Minestrone is classic Lansdale at his legendary best. For his legions of fans, the much-anticipated stories will fill some of the gaps in their collections. For new readers, they will soon come to appreciate why Lansdale is regarded as one of America’s finest living writers. Compelling. Hilarious. Poignant. Readers have waited a long time for this collection to finally appear. It was well worth that wait. Roll on the next sequels and prequels.