Joel Meyerowitz: Where I Find Myself: A Lifetime Retrospective (An Elephant Book) 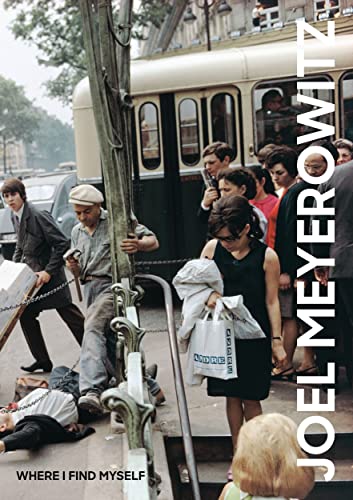 “After 40 years Meyerowitz continues to entice and enthrall with a consistency of vision that reshapes subject matter in his own light.”

Joel Meyerowitz: Where I Find Myself, is a lifetime retrospective of marvelous photography and compelling explorations. Meyerowitz takes the unusual approach of displaying his work chronologically from the most recent to the oldest, which changes and clarifies the way one would evaluate the arc of his accomplishments. And his latest work—which is reminiscent of the work of the painter Giorgio Morandi, as an exploration of still life’s subtle colors, textures, and shapes—is completely different and stimulating.

Joel Meyerowitz is a New Yorker who grew up in the East Bronx and in his own words, “. . . lived in easy relationship with the energies and spontaneous craziness of life on the streets there.” His epiphany came while working as a young art director on a location shoot with the experienced Robert Frank, and witnessing Frank photograph two young girls. The spontaneity with which Frank photographed the girls, instinctively moving around them and shifting his stance in tune with his subjects all while clicking the decisive moments, mesmerized Meyerowitz and made clear his life’s calling.

His fascination of people’s body language, their interactions, and how they moved in an urban setting were an intoxication he and street-shooter Gary Winogrand jointly pursued. And for about 12 years Meyerowitz’s work was characterized by candid black-and-white street-photography.

Then suddenly he reached a tipping point, and after much thought shifted from shooting 35mm to photographing with a large format 8-by-10 inch view camera. He states, “I was letting go of what I already knew how to do, to see what else could be said photographically, without using the familiar tactics and language of Henri Cartier-Bresson or Robert Frank. And then, as is so often the case with the technology of photography, an astonishing thing happened. Colour printing in one’s own darkroom suddenly went from being nearly impossible and very expensive, to much easier to do and barely different in cost per print than black and white.”

Meyerowitz still works with a large format 8-by-10 view camera, shooting color film as he has done since the late 1970s. The large film format, especially in his latest still life’s, adds an unrelenting measure of detail that both solidifies objects in hard-to-define ways, but also enriches them with a certain measure of subtlety.

Meyerowitz is one of those photographers who after 40 years continues to entice and enthrall because although he varies the subject matter, he has a consistency of vision that reshapes subject matter in his own light. This is true whether he is photographing landscapes, portraits, or life on the streets of New York City. Perhaps that is because he began as an art director and painter, and has always retained a honed eye for the aesthetic qualities that surround us.

This book encompasses his work from the earliest photos in the 1960s to the present, and it is a solidly inspiring body of work. Each chapter begins with short, articulate, well-written essays by Meyerowitz that are peppered with anecdotes and insights as to what prompted the projects, and how photography continues to enrich and provoke his love of image-making.

Early in the book there is a large portion of images that document the aftermath of September 11, 2001, and are gut wrenching. Meyerowitz was the only photographer granted unrestricted access to document the horror and ruin of the collapsed towers, and the painstaking work of workers searching for human remains. He documents it with clarity and an unsentimental approach.

Although Joel Meyerowitz’s roots are in urban street photography one of the things that continually inspires about his work is his adaptability and variety. Undoubtedly, his single biggest change was the switch from 35mm street-photography in midtown Manhattan to photographing the beach life of Cape Cod in color, with an 8-by-10 inch view camera in 1976. It resulted in his fabulous book, Cape Light.

Meyerowitz has worked in black-and-white and color, but I have always felt that color was the element where he broke new ground. And although this book contains both, it is a gem of his color work. The heavy weight matte paper is the perfect recipient of lustrous ink that evokes the beauty of an original print. The color reproduction is impeccable, the images are large, and the binding is flawless. If you are a fan of Meyerowitz’s work and especially of Cape Light, this lifetime retrospective will be a treasured addition.