Methland: The Death and Life of a Small American Town 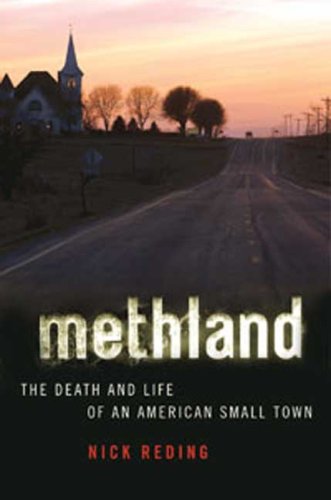 Methland: The Death and Life of a Small American Town by Nick Reding is one scary book. It posits that at a fundamental level meth isn't a drug problem, it is a symptom of our current societal and economic problems. The meth epidemic isn't about a drug, its about the economy, and so Reding's book is as much about the death of a way of life as the birth of a drug.

For those looking for a Breaking Bad experience, or another drug-porn description of whacked-out meth addicts, this is not your book. Instead, Reding, after returning to his hometown of Oelwein, Iowa, chronicles the descent from a thriving agricultural-based economy into a desperate place where cheap, easy to obtain drugs like meth were just waiting to move in.

Along the way Iowa's story parallels the changes in our broader national society and economy, focused here on Big Agra moving in, first destroying family farms and local meat packers, then replacing the workers in its new mega-facilities with cheap, disposable labor from south of the border.

Such changes, whether wrought by Big Agra businesses, Chinese steel, or Walmart, take away the life of the town but leave behind the people.

Just like Big Agra destroyed a way of life in Iowa, Big Pharma profited off the remains. Reding details how the pharmaceutical industry spent heavily and lobbied successfully to not limit the import of pseudoephedrine into the U.S. The drug companies needed that chemical to be available and cheap for their cold medicines, and were without care that that same chemical, distilled out of those same cold medicines, fueled the meth epidemic. Hey, it was just business, a perfect metaphor for the rise of profit above all else, the leaving behind of the 99 percent.

Reding touches on how easy the drug is to cook up in small batches, although a small mistake in the chemistry can result in horrific burns and explosions. Meth wasn’t a social drug, and so you didn’t need to hang around with old juicers in a dark bar.

Meth came to you. Your friends were using it, if not selling it or cooking it, and the angry, speedo high it gave fit the young guys better. Meth wasn’t only for boys, either. Girls liked it, too, and because you never thought about eating on a meth cruise, they called it the Jenny Crank diet.

As part of research leading to my upcoming book, Ghosts of Tom Joad: A Story of the #99Percent, I spent some time in the Rust Belt of the Midwest, where meth is as popular as in Iowa, and for the same reasons. Reding's descriptions and conclusion ring true.

But most importantly, meth just isn't cheap and easy, it is a Midwest drug. Instead of the flighty high of weed or the dulled feeling of alcohol, meth at first offers a powerful feeling of self-worth, of energy, that is the perfect antidote for the crushing depression and lack of hope the space around the user represents. For a world stuck in crap, meth was the answer.

This was a drug designed for unemployed people with poor self-images and no confidence. Of course the drug is a false front, as users quickly suffer from the debilitating health problems we are all familiar with. But that's a tomorrow kind of problem, and the lost users in Iowa and elsewhere know they have no tomorrow anyway.

Criticisms of the book are few. Reding includes far too much information on the personal lives of the few good people in town trying to better and about himself. These do little to support the central ideas and often detour the narrative. The book tries perhaps too hard to end on a positive note, focusing on the progress made but losing sight of how little winning one battle in rural Iowa means in the larger war for our America.

But don't let those points stop you from looking into this book. Skim the filler and focus on the important point: People without jobs, without hope, without tomorrows, will turn to things like meth to ease the pain. It's human nature.

As Reding writes, rock bottom is not a foundation to build on. And unless we as a nation figure out a better way forward—jobs that pay a living wage for more Americans, the reining in of big interests that rip apart the fabric of the nation around them—methland will be our land. We can't fix America's meth problem without fixing America.

Peter Van Buren is the author of the forthcoming novel Ghosts of Tom Joad: A Story of the #99 Percent, focusing on the decline of the middle class, the growth of the working poor, the end of industrialization, and the loss of community.