The Metaphysics of Media: Toward an End of Postmodern Cynicism and the Construction of a Virtuous Reality 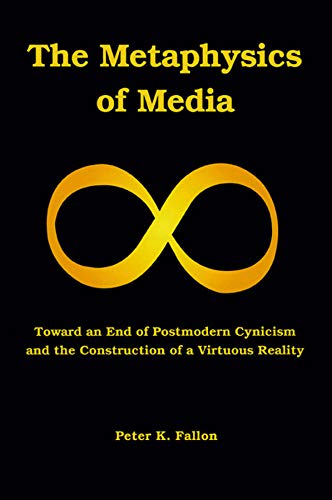 Why read a book with a title that would scare the sanest person among us? Is it to prove one is “highbrow” or an “intellectual” or just looking to fool those around him? This query comes up on a regular basis while reading Metaphysics, with full awareness that there is a fine line between insanity and genius.

Fallon’s book is a philosophical comparison of what lies beyond the physical existence of communication itself versus the various means of transferring information from one medium to another. It is a serious look at the epistemology of language in the determination of “true” versus “false.” It is also an attempt to discuss the physical nature of communication.

As with most books from the University of Scranton Press, this is a well-documented work. Fallon, who is an associate professor of Journalism at Roosevelt University in Chicago, makes excellent arguments and applies his knowledge in the first-person perspective, so the text reads more like a conversation than a lecture.

Fallon’s introduction is a chronological view of his family, his parents’ immigration from Ireland, his memories of radio and television, the Internet, and a 16-year stint with NBC’s morning show “Today”—all leading to his thesis:

“I have been forced to reconsider my earliest and most closely held beliefs about the role of television in our society. . . I began to question whether, even when it is functioning at its highest level, at its most professional, with its greatest degree of journalistic integrity . . . can television (and now the Internet) ever be seen as a medium of enlightenment and as an agent of change, or . . . merely another electronic medium of inane distractions from the reality of life.”

In layman’s terms, do television, Gameboys, Play Stations, computers, and the like provide nothing more than meaningless mental vacations? Your educated answer may just incorporate a direct quote from the one of the 20th century’s greatest philosophers, Curly Howard from “The Three Stooges:” “Certainly.”

However, this is a very serious statement concerning the future of media, why it exists, and how one should perceive not just the message, but also the means by which it is delivered. Even the cellular phone companies remind us that the telephone is no longer just a means of oral communication. Your new smartphone takes pictures and video, and with the introduction of the newest 4G iPhone, you can participate in live, interactive video conferencing. Should we, as a society and planet, join the revolution or look only for virtuous content and meaningful exchanges?

In his examination of these questions, Fallon follows his path from the defining of Objective Reality and the value of truth (whatever that is) through oral communication and the metaphysics of oral communication, doing the same for literacy and electronic media.

Whether focusing on the physical or metaphysical, each argument put forth is well developed. Each is supported with fact and personal insight, and by keeping this on a personal level, Fallon crosses that bridge from being death defyingly boring to interesting and insightful.

This reviewer does not agree with Fallon’s conclusion, though his position is understandable and supported. Fallon is redefining “virtuous reality” and “truth” while stating his concerns whether one should jump on the bandwagon of new media without knowing if the messages are insightful or an “inane distraction from the reality of life.”

Choose this well written book if you are “into” philosophy, journalism, communication studies—or if you just finished the unabridged complete collection of the works of Fredrick Nietzsche and are looking for something a bit lighter.

And while you are holding this book, you may ask yourself what the future of media might bring.