Messy Roots: A Graphic Memoir of a Wuhanese American 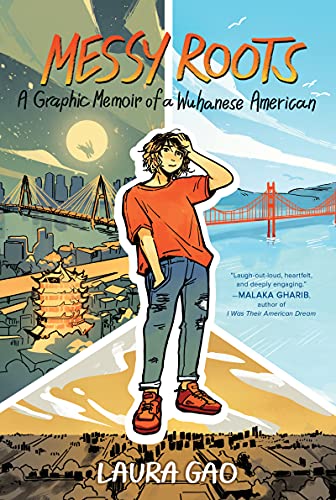 “The roots are messy indeed, but the tree blossoming from them is brilliant.”

Messy Roots by Laura Gao is aptly named. It’s not just that her background is complicated, born in Wuhan with an early childhood split between the countryside and the city, then a move to Texas where Gao took on the American-sounding name of Laura as she was surrounded by white kids. College follows in Pennsylvania and a job in San Francisco, with in-between the discovery of her attraction to women and the journey of leaving the closet. The story in these pages is also messy, jumping around from family scenes to those in church to video game characters taking over the narrative. The effect is a rich texture of Gao’s interests and experiences, plunging the reader headlong into her world.

Gao’s voice is honest and direct. She describes the difficulties of being an immigrant, of living up to parental expectations while navigating the demands of peers and school. Her retreat, even as a child, is art: “. . . at the studio, my paintbrush could speak for my heart when my voice couldn’t.”

Her frenzied childhood moving between worlds ends when she finds freedom from her family by moving far away from Texas to study at the University of Pennsylvania. Suddenly there are many Asians around her, confronting her with her own internalized racism when she makes fun of immigrant Chinese Americans as “fobby.”

As one fellow student demands, “Do you even know what fobby means? Did you have Asian friends?”

Gao answers, “I said it was a pretty white town—”

“That’s not an excuse to punch down.”

Gao bravely admits, “People in high school would joke I was ‘white-washed,’ and I always laughed along. It sounds dumb but I was kind of proud of it. This was the first time I didn’t feel the same way.”

This kind of direct honesty gives the book its strength. Gao doesn’t whitewash her story at all. Instead she brings us along as she grows, learns to appreciate her strong roots, reconnect with her family, and explore the person she’s becoming. The book ends with Gao in San Francisco, living with “all immigrant kids—Angie and I Chinese-American, Bill Chinese-Canadian, and Bryan Mexican-American.” Together they dive into the diversity and openness San Francisco offers. But when Covid hits the United States and President Trump calls it the “Wuhan flu,” even the supposedly tolerant Bay Area shows its limits.

“After being spoiled by how accepting San Francisco had been, I’d forgotten how easily people could turn when they’re afraid. Now every time I walked outside, I wondered, ‘will I become another statistic?’ And I wasn’t talking about COVID cases.”

Gao’s story closes on the strong note of her expanding confidence that she finally knows exactly who she is and where she belongs, both as a member of the Chinese American community and the LGBTQ+ one. The roots are messy indeed, but the tree blossoming from them is brilliant.