The Mermaid from Jeju: A Novel 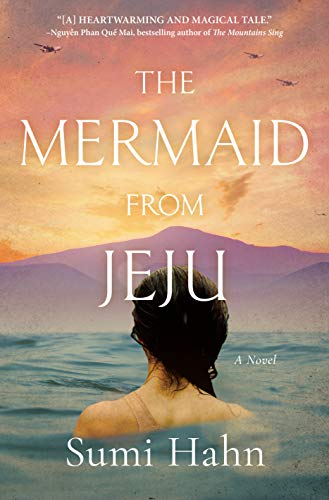 It seems a shame when a story begins with the death of the protagonist, but it signals the book’s trajectory and creates a story that must be told, now, lest it be forgotten. The Mermaid from Jeju spans decades, captures history and lost tradition, uncovers secrets, and more importantly, is a witness to events that live in the beat of every involved heart, but have been silenced for decades. So when Junja is recalled saying to her daughter, just after the reader has learned how an embolism claimed her life, “Here is a secret: Long long time ago, when I was a girl, I was a mermaid, too,” the page must be turned.

It’s 2001 in Philadelphia. The narrative of The Mermaid from Jeju rushes back to Jeju Island, in 1944, when profound changes in their seaside village society had already been woven into the tapestry of this story.

Junja is slapped awake from a dive that almost drowns her. The narration continues with its lyrical charm: “Out of her mouth spilled the tides.” She has imagined a dream while she swam underwater, and her mother presses her to know what happened in her dream, because dreams predict the future. When Junja reveals a rock clutched into her palm from the deep, the women surrounding her shout and murmur. “You are a true haenyo now . . . You belong to the sea.”

The Mermaid From Jeju is a tribute to the haenyeo—women whose muscles are strong for swimming, whose lungs are large, who are considered more valuable than the men in their community, who dive to forage for sea weed and shellfish in the waters around Jeju Island, off the tip of South Korea.

The story is filled with colorful images, tinged with old world charm: “The ocean sucked each diver down greedily. But the women were prepared for battle. They swiped their knives at the fingers of the sea grass that clutched at them. They used picks to pry away shells clinging to underwater rocks. They worked the waters, humming the chants of their forebearing mothers, who had explored the deep before them.”

The story begins in this simple world, held together by a community of people who have lived in harmony on the land and sea for centuries, bolstered by fables of dragons and giants and gods; the community is now struggling to survive the onslaught of the outside world in 1944. The perilous political climate, from the earlier Japanese invasion that led to Korea’s occupation by US troops, is now an unpredictable danger to everyone—as random beatings and shootings are the result of gossip and fear running rampant in the camps of the occupiers.

In this community, Junja is a young woman who has just been deemed strong enough, knowledgeable enough and skilled enough to become haenyo. Soon afterward, she convinces her mother to let her take her place on the Goh family’s annual trip to Mt Halla. Here, trading the riches of the sea for land-raised pork, Junja meets Yang Suwol and falls instantly love.

As soon as Junja ventures outside the village toward Mt. Halla, the political situation becomes apparent, as roads are guarded by occupying soldiers who have deemed “communists” their enemy, who fear everyone, and who behave dangerously and arbitrarily. Junja returns home a day later, just in time to watch her mother, her face almost unrecognizable, die—apparently having been tossed by the waves on a dive she took in Junja’s place.

With her mother’s death, Junja’s world unravels; her siblings are sent away to live with their father; rumors inspire fear in the villagers: raids root out “communist sympathizers,” airplanes swoop dangerously down. And then, Suwol is arrested. When Junja learns from her grandmother that her mother didn’t drown, but was beaten to death by the same people who have captured Suwol, the narrative irrevocably charges ahead toward the destiny of Korea, caught up in the paranoia of war.

Part 2 moves forward in time to the unspooling of Junja’s life since Korea; Suwol is absent and Junja is married to a Doctor Moon and living in Philadelphia. The questions Junja’s husband asks and the peace he seeks after his wife’s death pull up the threads of their shared history in Korea in 1944 and reveal not only the destiny of Suwol, but a dark secret neither of them were able to acknowledge during their lifetimes.

Sumi Hahn creates a world alive with dreams, with gods, with tradition and the richness of a rural Korean culture, from foods, to fables, to generational relationships. There is a wonderful Glossary of Korean Terms so the reader can indulge in the rich meaning from the Korean words peppered through the narrative.

The Mermaid from Jeju is a satisfying historical novel that although spoiled by war, celebrates a time that seems as mythical as the idea of Mermaids. It opens on a window of Korean life when women were stronger than men; when they lived in peace as leaders in their communities, bringing home the food that sustained their villages, when they could swim farther and hold their breath so long that they may as well have been the Mermaids from Jeju.