Mergers and Acquisitions: Or, Everything I Know About Love I Learned on the Wedding Pages 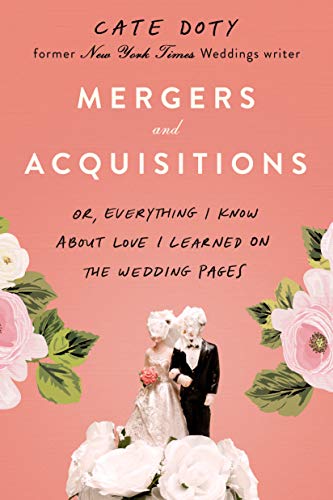 Cate Doty’s memoir Mergers and Acquisitions, Or, Everything I Know About Love I Learned on the Wedding Pages is a book written to appeal to those who love wedding culture, not to convert doubters of any stripe. That culture, too, is very particular. In the early pages, Doty writes, “I have loved weddings for as long as I can remember. . .” and inventories her childhood love for wedding-related objects: dresses, bouquets, silver patterns, and etiquette guides.

The etiquette guide is important, because this a book not just about wedding culture, but about the spectacle of weddings and how it’s used to maintain class standing for a particular (white, relatively wealthy) group. That standing relies on elaborate formality and symbolic graciousness with a vicious streak beneath. Doty reminisces that “When I was twelve years old, I forgot to write my grandmother a thank-you note for my birthday money.” At Christmas, she faces a reckoning: “(Stop me if you’ve heard this WASP tale before.) I looked for an envelope with my name on it, but all I saw was the outline of a book in expensive wrapping paper. . . . I peeled back the paper to reveal a thick yellow tome: The Amy Vanderbilt Complete Book of Etiquette: A Guide to Contemporary Living.” Those who fail to maintain the symbolic rituals of class will be passive-aggressively reminded until they fall into line.

The wedding pages that Doty writes for at the New York Times are the print extension of her childhood culture. “Contemporary” in this context is modern only in the sense that it’s playing out in the present day. In most other ways, it reflects an earlier America of unchallenged access to powerful institutions and the breezy privilege that maintains the illusion that all of this is reasonable and charming.

Doty’s career path is short, from UNC to the Washington bureau of the NYT to the wedding pages in the City itself. Her association with the wedding pages is already a close one: “Occasionally I saw someone I thought I recognized from boarding school.” Though Doty never names herself as part of Society, her anecdotes of childhood and her passing remarks both place her there, a not-necessarily-moneyed but still well-connected lady who slots easily into a long-established system.

It's a well-established system, and one Doty rarely challenges. She’s up-front that “The Times has a strict formula that they’ve stuck to for decades: names, ages, occupations, educational background, parents, parents’ occupations, and, only if it’s relevant, the bride’s or groom’s prominent ancestors, like a president or the first chairman of Standard Oil.” The paper began publishing these announcements in 1851, and Doty includes the full text of a Vanderbilt wedding in 1880. She suggests that “The Times wedding announcements are signalers not just of social class but of intellectual and economic achievement.”

It’s this kind of remark that reveals the shallow water beneath Doty’s reflections. The ways in which class and privilege facilitate “achievement” go unexamined. The Times’ maintenance of whiteness as elite status is treated as vaguely problematic, but not so much so that real change is necessary: “Ira [Goetz, the society editor] was certainly not blind to the lily-whiteness of his pages, but, as he repeatedly pointed out, he couldn’t run announcements that weren’t submitted. But that’s also not entirely true; for the occasional high-profile wedding . . . Ira would concoct an announcement that drew on details that were known to the press already.” Black wedding announcements stay out, even as same-sex announcements arrive.

In this course of this discussion, Doty notes that American “mainstream” newspapers have a history of refusing to run Black wedding announcements (making Goetz’ protests that black couples don’t submit announcements deeply disingenuous), or running them only in “the Negro news pages.” She provides a brief history of black wedding announcements within Black papers, but doesn’t go much beyond this, and beyond that chapter, race lies unaddressed as Society, wedding culture, and the wedding pages dance on, celebrating their own delightful details.

Doty’s memoir of her own love life is the least engaging part of the book, largely because she offers so few insights into her own psyche. It’s odd to read a “memoir” in which the protagonist is so thinly presented. “Cate” the character breezes through career leaps and minor romantic crises with all of the gravitas of a secondary Candace Bushnell character. In fact, though she mentions Sex and the City only in passing and only contemptuously, Doty’s writing sounds almost exactly like a Carrie Bradshaw voiceover. In each section, her value and the value of the system about which she writes are reaffirmed, without any real tension along the way.

Merges and Acquisitions is a book like its cover art of a cake-topper: sugary, faceless, and apparently presented without irony. The result is a book like a wedding cake: pretty to look at but not that appealing to consume, and ultimately frustrating as its promise of real insight is buried beneath sheets of fondant enthusiasm.