The Mercenary: A Novel 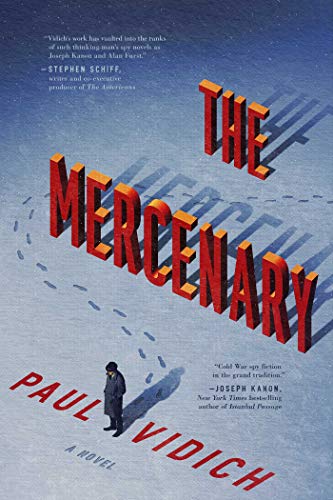 “Vidich carries the wintry mood of Soviet menace and danger powerfully, and his plot twists are tight and all too believable. “

The third espionage novel from Paul Vidich, The Mercenary, slides back to six years before the collapse of the Soviet Union, when Moscow provided a frightening standoff of Soviets and Americans, and the notion of an American president being a “friend” of a Soviet leader couldn’t even be considered as a political move. With George Mueller, a CIA agent rolling out of the embassy and into a late-in-life mission to meet a new Russian spy, the moment is all about rational fear and determination.

But Mueller’s nighttime adventure hits a swift end in police hands, betrayed somehow, and when the Soviet source comes back into contact with the “Agency,” that person has one unconditional demand: that the new American case officer drawn in to connect with him in the future be Aleksander Garin.

Garin is the “mercenary” of the book’s title. Burned by a betrayed operation of his own on Soviet ground, when he’d lost the life of the general he was trying to assist out to freedom, he’s retreated to a New York City life of increasing despair and loss, taking short assignments that he can’t explain to his wife, with little continuity or satisfaction. The call to the new assignment arrives when he has nothing else to hold him. So he lands back in a nation he’d never expected to see again.

“Garin didn’t talk on the drive in. . . . There was something illusory about time and space that in the moment made him feel as if he’d never left the Soviet Union. The low visibility darkened his mood and reminded him of the morning he’d been forced to flee. It haunted him that he hadn’t seen, or chose to ignore, the obvious dangers. . . . Nothing has changed, he thought. But things were different. He was older, with a scar on his neck, another name, and a new assignment.”

Garin’s return to the Soviet Union is by definition perilous, with all the odds against him. His own identity as some sort of Russian himself will slowly unfold over the course of his mission—but there’s no question that somewhere in the Soviet files, his image and story are well documented, and he’s in danger from this moment on, in Moscow.

Vidich carries the wintry mood of Soviet menace and danger powerfully, and his plot twists are tight and all too believable. Garin’s forced progress from one crisis to the next reveals much more than his Russian self and his past failure; however, the new “source” has asked for Garin not by name, but as the person who’d failed to get the general out. The forced play is intended to dig into Garin’s own self-image and presumed longing to redeem himself, after such a colossal failure. His new contact, “Gambit,” is counting on Garin to get things right this time. Redemption.

But espionage is a landscape where nothing’s likely to be or go right. Everyone involved knows this. George Mueller himself struggles to protect Garin from the self-serving manipulations of his own “side,” while the KGB maneuvers to find out who’s now leaking secrets to the Americans, and to make sure there are no long-term rewards for such actions.

For readers new to espionage and to the climate of the dangerous Cold War, Vidich’s book provides a fast-moving and emotionally powerful ride into the darkness of both spying and the battered soul.

The book’s effect on seasoned readers in this genre may be very different, however, since two questions insist on being addressed: Why title the book The Mercenary when, even from Aleksander Garin’s first step on Soviet soil, it’s clear he’s engaged for far different motives than money? (Is there a true mercenary anywhere in this book?) And second, inescapably, why has Vidich named his protagonist “Alek” when the book’s closest parallel is The Spy Who Came in From the Cold, the John Le Carré classic that lures Alec Leamas into tragedy?

Ultimately, the deepest and most painful conflict in The Mercenary becomes whether Alek Garin must meet the same ending as Alec Leamas. Vidich holds the issue in fierce suspense all the way through this standalone thriller.