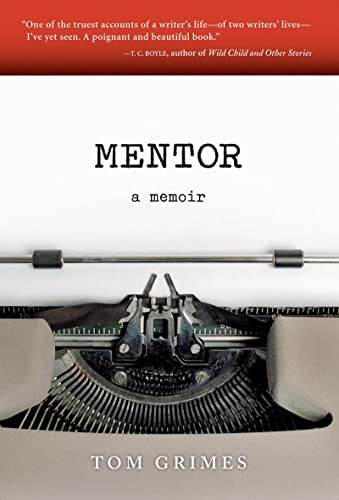 This is a memoir about a writer, Tom Grimes, whose idol was famous for writing a memoir. It began as a eulogy written by Grimes for Frank Conroy, the author of Stop-Time: A Memoir that was published in 1977. Grimes decided to expand that eulogy by writing in detail about how he came to be discovered by Conroy, a noted instructor at the Iowa Writers’ Workshop. This, however, describes just half of the narrative—the book might just as easily have been titled A Writing Life, as it fully details the obstacles, impediments, and vagaries that can overwhelm an ambitious young writer.

Interestingly, Grimes and Conroy first happened to meet when the former was an applicant to the Workshop. The meeting went so badly that Grimes left and destroyed his copy of Stop-Time. But Conroy randomly happened to read the manuscript for a novel written by Grimes, and greased his admission into the Iowa Writer’s program. Conroy and Grimes had such an obvious father-and-son relationship that many of Grimes’ fellow students derided him as Conroy’s “golden boy.”

The sections where Grimes writes about Conroy are reminiscent of the tone used by John Gunther in Death Be Not Proud, the account of his son’s death at the age of 17. The tone is quiet, sad, respectful. In contrasts, the writing has a sometimes jarring quality when Grimes details his own rollercoaster-like (and manic) career as a young author. With the strong support of Conroy, Grimes’ first novel resulted in a small bidding war among publishers for the rights. Grimes went for the highest payday only to find that the promised public relations campaign for his novel was never to materialize. And then no publisher wanted Grimes’ second novel.

Grimes clearly covers his descent into depression and near-madness in a manner that only some will wish to read. The more fascinating pages are the ones which provided a view into the world of publishing; it’s a world where a writer can be offered a six-figure advance one day and find that the offer has dropped to the very lowest of five figures the next.

This memoir concludes in a way that the reader will find—depending on his/her perspective—either encouraging or unimpressive. Grimes was 54 at the time he wrote Mentor, the same age that Conroy was when the student-writer Grimes met his most important instructor. Grimes is now a college-level journalism professor. He teaches in Texas rather than in Iowa, but serves as a replica of Frank Conroy. This can be viewed as a heartfelt, living, tribute to his mentor or, alternatively, as the reliving of a life that had already run its course.

This is an admirable and frank memoir of two lives that, for all of its stark candor, falls just a bit short of being the type of inspirational account that one would read and subsequently re-read. The first half of the book was far more engaging than the second half. Mentor leaves one with a sense of sadness and wariness about life, which was likely the writer’s intent.