Memory Warp: How the Myth of Repressed Memory Arose and Refuses to Die 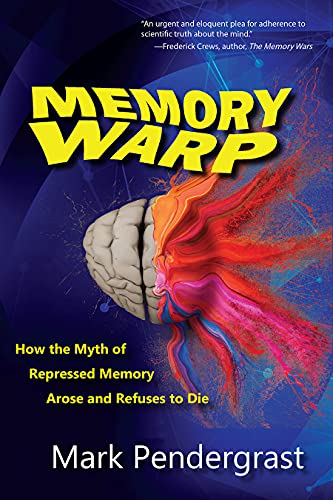 Imagine this. You and your wife have always enjoyed a loving and open relationship with your three daughters. Your eldest did experience some problems with depression, eating disorders, nightmares, mood swings, and the like, but you assumed that these were just the growing pains of a sensitive soul— until she went into therapy and began to recall childhood sexual abuse, maybe involving satanic rituals, torture, bestiality, and cannibalism or even more bizarre perversions. And you are accused of being the perpetrator!

Devastated, you compare “before” and “after” therapy letters.

Just a note to thank you for taking such good care of me and my friend during our much-too-short stay. My friend is impressed and a bit envious of the loving relationship and open lines of communication which you and I share . . . I love you and I’m glad you’re my dad!

I am writing this letter for two reasons (i) to attain closure for myself regarding my relationship with you and (ii) in the hope that you will seek help before you hurt anyone else the way you hurt me. I have spent 37 years of my life denying and minimizing the torture that was my childhood and adolescence . . . I genuinely hope that this letter causes you to seek help—you are a very sick man. I do not wish to hear from you unless you are willing to admit the things you did to me and to seek help for your sickness.” (Mark Pendergrast, Memory Warp)

The bottom has dropped out of your world. You face a Catch 22 situation where you are dead to your child and maybe to other family members who side with her, because  of allegations of appalling crimes based on false memories recovered via dubious therapeutic techniques such as hypnosis and guided memory, and the use of sedative-hypnotic drugs. You are likely to lose your job, your home, your friends, and your reputation. You may even have to register as a sex offender and face extended jail time if you plea bargain in the hope of saving some shreds of your ruined life.

These kinds of horror stories told by the victims of false memory syndrome accused of child sexual abuse, along with the extreme trauma experienced by patients in recovered memory therapy become engraved in the minds of readers of the latest book by critically acclaimed science writer and independent scholar Mark Pendergrast, Memory Warp: How the Myth of Repressed Memory Arose and Refuses to Die.

This work is a follow up from Pendergrast’s groundbreaking 1995 book Victims of Memory which explored the controversy over the accuracy of so-called repressed or recovered memories of sexual abuse at the height of faddish epidemic of pseudoscientific psychotherapy which tore apart modern psychiatry in the 1990s.

Over 20 years later, “although repressed  memories have been widely discredited among those who study the science of memory, there appears to be a resurgence of belief in this dangerous theory.” Hence the urgent need for an update so that we learn from the past and avoid the likelihood of damaging countless more lives.

Pendergrast approaches this daunting task via an exhaustive compilation of research on the rise and putative fall of therapy derived from Freudian assumptions that people can “repress” or “dissociate” years of harrowing childhood abuse and then recall them as adults. If you think you might have been abused you were, despite the absence of corroborating evidence, and only by “remembering” the abuse under intense psychotherapy can you be healed.

Key issues here, in addition to the impact of false claims on victimized family members are ongoing professional debates about the very existence of repressed memory, the validity of dissociation and the continuity of memory along with questions around the role of the therapist in pressuring already disturbed individuals to conjure up abuse scenarios. Ethical concerns about therapeutic practices more likely to cause trauma in patients than heal are also paramount. And the use of expert witnesses on both sides of the memory fence in court has been highly problematic.

“It is difficult to convey how saturated our culture became with the repressed memory phenomenon . . . Many hundreds of lawsuits were filed by patients with brand new abuse ‘memories.’ Thousands of stunned parents became the first innocent people targeted by the repressed memory epidemic . . . In the 1990s over 500 reported cases were filed in which the only evidence stemmed from recovered memories—15 percent were criminal, 85 percent civil cases. Hundreds of additional cases were quietly settled without formal filings, as many parents were embarrassed, devastated and terrified, or they wished to avoid a lawsuit against an obviously mentally ill daughter.”

As a science writer who has researched recovered memory theory and practice for over 30 years, Pendergrast is in a prime position to show us where pseudoscience does not meet the standards of science in this murky field, where opinion and belief have tended to eclipse solid theory and reasoned professional judgment.

Pendergrast sifts through the jargon-laden pseudoscience via painstaking research grounded in interviews he has conducted with patients, family members and practitioners over the years.

He begins by winding back to the 1980s and 1990s, a time that spawned both the repressed memory epidemic and moral panics such as day-care sex abuse hysteria to uncover how you can become a “survivor” and join the ranks of the accusers.

Next he examines competing theories around memory, repression, and dissociation and the impact of key contributions to the survivor literature. The third chapter deals with how people can be made to believe the unbelievable via hypnosis, age regression, past lives, facilitated communication, body memories and the like. The fourth chapter covers multiple personalities and satanic cults and is followed by a chapter on induced child accusations. The next chapter provides a brief history of the witch craze and Freud’s legacy followed by a chapter on cultural contexts influencing the rise of the repressed memory epidemic in the late 20th century. A last thematic chapter considers survivorship as religion.

We are not done. The book ends with 93 pages of conclusions and recommendations, not only about putting to bed for good popular myths about repressed memory, but about sex abuse hysteria in general which “continues unabated, two decades into the 21st century. A sex abuse accusation is still the ‘nuclear bomb’ that can be dropped effectively in the midst of an ugly divorce, family spat, or dispute with a teacher.”

Most harrowing reading are five pages of extracts from pleas for help sent to the National Center of Reason and Justice (NCRJ), which calls attention to false allegations of child abuse, for which Pendergrast works as a volunteer. Evidently, recovered memory still continues to be popularly credible even though repressed memory theory has been debunked in most scientific circles.

Pendergrast ends with a plea for recovered memory therapists to work to repair the damage they have caused to both patients and their families and with an exhortation for all of us to make sure that it doesn’t happen again on a kinder, gentler planet more attuned to inevitable human imperfections and insecurities.

Unfortunately, we seem to be moving in the opposite direction toward a climate of neo-nationalist, racist, and gendered public incivility, wherein uncritical fascination with alleged sexual abuse and the like leads a surprising number of people to believe the unbelievable such as the fake news report that Hillary Clinton is running a child sex trade ring out of a pizza parlor! Meanwhile, a culture of complicity continues to protect the real abusers.