The Memory Palace: A Memoir 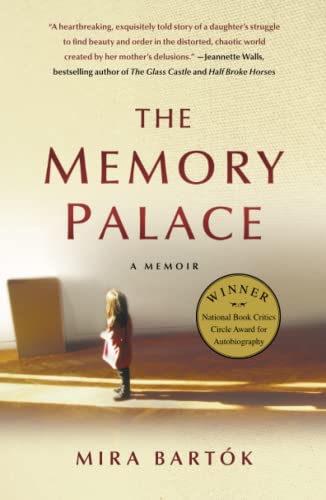 When she turned seventy-nine she wrote to tell me that although she was now legally blind she had decided to study medicine: “I am thinking of going to nursing school . . . That way, if I ever get sick or lose my sight completely, I’ll know what to do.” I found a set of her teeth inside an old eyeglass case.

In The Memory Palace, Mira Bartok writes of a world that, sadly, too many of us will come to experience. This is the world of the adult child whose parent is not only rapidly aging, but entering the throes of dementia or full-fledged insanity. Whether caused by disease or mental illness, the results are the same—a parent terrified of having bad things happen to him or her brings those very results about through his or her own irrational behavior. Bartok’s mother Norma was terrified of becoming homeless but became so after stabbing her own mother—who suffered from dementia—six times.

When her two daughters were young girls, Norma was diagnosed as having severe schizophrenia, and it cost her both a husband and a home. Aside from the illness, Norma was a highly talented classical pianist who might have become a household name. But it was not to be. Mira and her sister grew up in a hellish home with a mother who heard voices in her head—voices that caused her to lose touch with reality and normalcy.

As anyone who has lived through it knows, once a parent begins acting irrationally, his or her behavior will inevitably continue to deteriorate. We no longer seem to have systems in place for properly dealing with the problems of the aged with mental issues. They may be medicated or locked up for various periods of time (from hours to weeks or months), but they simply do not “get better.”

Bartok is to be commended for writing frankly about an adult daughter’s reaction to this, and it is mixed. One third of her escaped by thinking back to the times when her mother was seemingly normal—a time before this parent’s rapid descent into madness. One third of her lived in denial, literally trying to escape by hiding from her mother in Europe and elsewhere. And the last third consisted of the daughter who sometimes had to take harsh actions against her mother—such as attempting to get a court to declare her incompetent—knowing deep down that the situation would only be resolved (made peaceful) with her mother’s death.

It becomes clear to the reader in this account that although Bartok lived a very difficult life due to her mother’s mental instability, she very much loved her mother and has wrestled with feelings of guilt (“I abandoned my mother to the streets”). As a young woman, Bartok was involved in a car accident that injured her brain and led to memory problems. This provided her with a measure of insight into her mother’s faded connections with the world.

“. . . I go to the church and light a candle for my mother. Not that I believe it will do any good; it’s just to remind myself that she is still lost in the world.”

This brilliantly written work reminds us that self-examination and self-forgiveness precede forgiving others for their real or imagined wrongs. It’s a harsh world—a dark ocean—out there, and we sometimes need assistance in navigating our way through it. This memoir tells us that lighthouses exist.