In Memory of an Angel 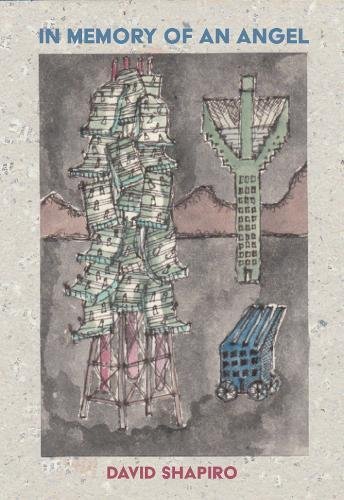 In his collection of poems, In Memory of an Angel, poet David Shapiro is something like a tour guide. Or a university guest lecturer, or the owner of that B&B you’ve always wanted to try, or the host of a reality TV show. Along with his narrative, Shapiro bangs away at his subjects like someone adept at ten-finger typing who finds himself equipped not with a computer, but a blank piece of slate and an endless supply of chalk after having watched Einstein romp through the blackboard version of his Theory of Relativity to an audience of one.

That is to say that David Shapiro is adept at the illustrative use of language. And the structure of his poems, though often narrative and presented from a first person voice, exposes, like Einstein’s presentation would, one idea broken into many parts and sifted even further to the very essence of what makes language powerful in the hands of a poet. He does all that with a consistency of style within In Memory of an Angel that hallmarks the work of each poem as uniquely his, in the same way a silversmith would hallmark creations he has founded, as a matter of course.

In “Two Ways,” Shapiro begins with his chalk in hand:

There are two ways of writing on the earth:

With an ending or without an end.

If with an end try not to end with oceans.

Without an ending is a poet’s delight.

Though narrative, the first stanza’s approach is to leave the thumbprint of the poet almost from the start, the line that takes a reader away from the instructional to the allusory, “If with an end try not to end with oceans.” And because of Shapiro’s ability at both the narrative and the lyrical side of each of his poems, a reader must necessarily become engaged in the grey soup of the poem from the beginning. With that necessity now established in this poem, Shapiro builds on it with the next stanza:

You don’t carry a sink while walking in the street, do you?

Fly past me on a lane that doesn’t exist!

I saw John Dewey waffling through the night.

He said that poetry was not “about.”

But the narrator, still madly punting with chalk and slate, is not about the accept that poetry is not “about.” In form of proof, he takes the very next lines to show readers that poetry is indeed “about”:

And there’s the critic with a handle for a pot.

And the young title rising to the roof.

There are two ways of loving on the earth:

And so the poet neatly shifts the poem the do the opposite of what the narrator has said, but his narrative, like the chalk, leaves a little dust, makes a few errant marks, gets all over the poet’s hands and in some way larger than the sum of all the words committed to slate, tells a much bigger story. This is what David Shapiro does best: using narratives to introduce his lyric to twist and convolute and bring a greater essence to light.

Shyly he asked you if he could write you

I said Nothing is worse than unwanted poems

In the Navy you may be prosecuted for

Unwanted poems or rather sending

Or speaking though unwanted poems

But look at the snow as gift: hated by commuters

snow is finally loved and compared to poetry

there’s an economy to snow-hatred

in your smile as you accept my perhaps necessary poems

There is much substance to be found in any reading of In Memory of an Angel and it is fitting that Shapiro brings to light the necessity of his poems. In his role as narrator for the extrapolation of language, he captures the attention of those sitting before him. But it is what goes beyond narrative—the twists and turns he is so adept at bringing to the surface and plowing though with a kind of mathematical reality, those segments of his poems he has so carefully constructed with mastery—that make this volume truly compelling. And more than that . . . absolutely necessary.