Memoirs of a Book Thief 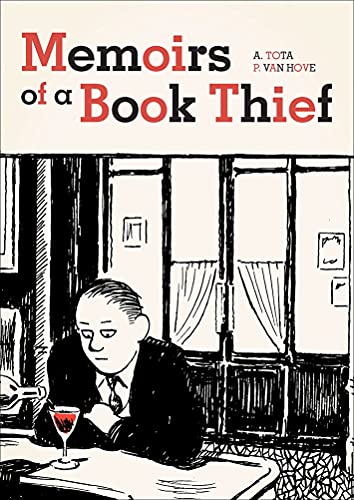 “An intriguing story asking the eternal question, What is Art? . . . Tota and Van Hove have created a vivid world of artistic creation from performance art to life as art to writing to drawing, all rolled into one, an impressive feat that proves in itself what a book can do.”

Featuring a hero who looks like an adult version of Tin Tin, Memoirs of a Book Thief merges different creative impulses into an intriguing story asking the eternal question, What Is Art? The narrator, Daniel Brodin, is introduced to us first as he shoplifts a book, and the theme of theft is woven throughout the graphic novel, becoming a creative act in itself.

Brodin's second pilfering happens at a Poetry Night at a cafe where all the hip young artiste types hang out in Paris. Instead of reciting one of his own poems, Brodin offers an impromptu translation of a little-known Spanish poem and is rewarded with accolades and offers to publish his work.

Having fallen in with and been accepted by this nihilistic arty crowd, Brodin finally finds meaning for his own impulses, a community that validates his life. As one man says, “Making certain choices, living a certain lifestyle .  .  . these are already artistic acts. Actually, they're the only artistic acts still possible.”

When Brodin confesses his plagiarism to his new pals, their response is that this was theft of the highest artistic order: “You've unsettled the entire Parisian intelligentsia! Revealed them for what they are: utter imbeciles! We must make your actions public with a manifesto. We'll put it up on every wall in the city!” While certainly not Brodin's intention, he eagerly grasps this interpretation, redefining himself from book-stealing poet to “Daniel Brodin, avant-garde artiste . . . After all, knowing how to reinvent yourself is the key to lasting success, right?”

A series of adventures follows as Brodin becomes enmeshed with a gang of fellow artist-thieves. The story builds as a big heist is planned, and at this point the graphic novel steps back, becoming a story about writing the story. The poet changes his focus from poetry to fiction, finding his true creative home: “I'm in love. In love with the novel I'm writing. Through its lens, I love everything I see.”

Brodin describes the planned robbery, while setting himself apart as the chronicler of events, not actually there, but part of the action by writing about it. “Endings are always the trickiest part of a book. But I still had time to ponder it. I was in no hurry.” In the end, though, Brodin the character or Brodin the author gets roped into participating; it's not clear which—precisely the intention of this verbal-visual exploration of artistic acts.

“What are the final impressions we want to leave our readers?” the book asks. “Is there any hope? Or does the future only have bad surprises in store?” What level of reality are we reading about? Which story is being told here? Brodin continues, “I can't find my notebook . . . I lost it. But I don't need it anymore. I'm the protagonist of this story. I'll just call on my memory.”

Tota and Van Hove have created a vivid world of artistic creation from performance art to life as art to writing to drawing, all rolled into one, an impressive feat that proves in itself what a book can do.